UK VOD TV review: The Flash Episode 13 and 14 | Where to watch online in UK | How to stream legally | When it is available on digital | VODzilla.co

Tell her the TRUTH

With its first self-contained two-part story arc, The Flash continues to display the ambition and boldness that has served the show so well in its opening season.

The main focus of both The Nuclear Man and Fallout was Firestorm (or F.I.R.E.S.T.O.R.M.) and the two-parter served as an origin story of sorts for the DC hero. For the most part, it was well handled, with the latter episode serving the character far better. This is in no small part due to Ronnie Raymond and Professor Stein spending more time in their respective bodies; Robbie Amell’s impression of Victor Garber’s Professor in The Nuclear Man left much to be desired, but their banter in Fallout was a lot of fun, with plenty of memorable one-line witticisms to go round. The eventual team-up with The Flash was well worth the wait – if frustratingly brief – and, although the respective hours neglected to delve into Firestorm’s transmutation powers, the visuals were of the high quality we’ve come to expect from the series; you can add that shot of The Flash and Firestorm heading back to base to the list of the show’s best moments so far.

Ronnie’s return also gave Carlos Valdes’ Cisco and Danielle Panabaker’s Caitlin some more emotional material to grapple with. The guilt felt by Cisco, in addition to the sadness and regret Caitlin had been dealing with, all came to a head here, and once again it’s great to see that The Flash isn’t waiting too long to resolve these plot beats. It will be especially interesting to see what direction Caitlin will take going forward, now that her arc with Ronnie has arrived at an effective (if temporary) closure.

Alongside the Firestorm drama was Joe’s investigation into the murder of Barry’s Mom, and that yielded some potentially series-altering revelations in the two-parter. While perhaps not as automatically endearing as the Barry-Joe dynamic, the Joe-Cisco bromance made for a lot of fun, and it’s a pairing we’d definitely like to see more of. To that end, Cisco explaining time travel to Joe using movies was a nice, humorous touch.

There was also a little romance in the air, as Barry went on a date with Linda Park (small screen veteran Malese Jow). Jow plays cutesy very well and there were a few nice moments between the new couple, but this can’t help but feel like a placeholder fling, albeit one that gives us a bit of a respite from the Barry-Iris-Eddie angst. Speaking of Iris, it was a tale of two episodes for the character. The Nuclear Man had her acting out as the jealous ex-but-not-actually-ex girlfriend, while Fallout focused on her most promising arc to date: being a reporter. The former story line has been the weak link of the show for a while now and the fact that most of the character’s problems could be solved by her knowing the full truth about Barry makes it especially irritating.

Here’s hoping the writers take their cue from Arrow and pull the trigger on that sooner rather than later, because that’s one of the few recurring flaws on a show with many strengths. Indeed, that The Flash is now introducing fantastical foes like Gorilla Grodd only indicates the confidence level is super-high as we speed into the last few episodes of this excellent maiden season.

The Flash is available to watch online on NOW, as part of a £7.99 monthly subscription – no contract. Sign up before 27th September and new customers will only pay £1 for their first month. 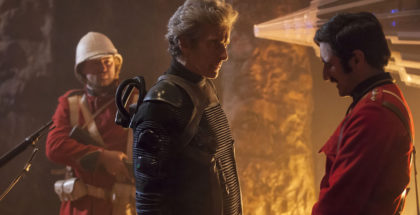