UK TV review: Mad Men Season 7, Episode 13 (The Milk & Honey Route) | Where to watch online in UK | How to stream legally | When it is available on digital | VODzilla.co

A sorrowful shot of realism and finality.

Already seen Episode 13? Read on at the end for some additional, spoiler-filled analysis.

Opening on a dream sequence/flash forward in which Don is questioned by the police in a very familiar way, The Milk & Honey Route represents the other side of the previous episode’s coin. Where Episode 12 examined the corporate loss to the SC&P team, 13 explores their forgone personal lives. Following Pete, Betty and Don in stories filled with far less flamboyance or sarcastic nonchalance than last week, the episode is a sorrowful poem that forgoes the comedy and wit of old to make way for an imposing sense that the end really is nigh.

Don is dealing with the move to McCan-Erickson in a very fitting fashion. Here he’s taking time for himself, driving around ‘classic’ America, interacting with the folks and revealing far too much about himself the moment he feels safe. A surreal and tough little story, it calls back to the exact moment he stopped being Dick Whitman and started his journey towards being an award-winning, millionaire Madison Avenue Executive. Where one case of mistaken identity lead him there, this week’s ends a little messier after a collection tin is robbed during a veteran’s dinner. Uncomfortable, nostalgic and tense, the situation becomes a heartfelt look at Don’s situation – where he came from and where he is, still desperately soldiering on to find somewhere he belongs.

Pete Campbell gets a similar treatment. After boozy chaos-merchant Duck Philips tricks him into a job interview, Pete is given time to feel as valued as he always wanted to be, while attempting to reconnect with his family. Despite the size of the subject matter elsewhere in the episode, Vincent Kartheiser and writer Matthew Weiner manage to produce a heartfelt speech from Campbell that all but steals the episode. A welcome return for both the fantastic Kartheiser and on-screen wife Alison Brie – who gives the entire situation an air of bright-faced melancholy – it may have taken this long, but it could be that Pete has finally got a shot at everything he always wanted.

The final story arc – the one that people will be talking about – is introduced with no whimsy, and no mercy. Betty, and Henry, are forced to confront some bad news, which Betty naturally deals with by putting on her sternest face, brushing her hair and reaching for the cigarettes. The first major challenge the pair have faced, Henry’s insistence that everything will be fine evokes Don’s perfect easing of Betty’s fears, and reminds us how far she has come. Eventually, he reaches out to Sally. Kiernan Shipka continues her run of being one of the most lovable characters within the show, but the scene (and possibly the episode) is stolen by Christopher Stanley. A big part of the series more in spirit than in presence, Stanley’s grinning hand-shaker gets his time to shine, with not a moment wasted.

With every plot line almost finished, Episode 14 looms with answers to all of our questions – although very few are answers anyone wants to hear. Don seems as free as he has ever been, but that’s undoubtedly about to change. With the episode cocked and loaded to conclude these stories, it’s a testament to the power of Mad Men that still, with only that hour to go, anything could happen. So sit back, and grab a drink. Everything’s going to be fine.
​

– Interestingly, Don’s little premonition about being arrested could be for pretty much anything at this point. Was it to do with the veterans? Do they know who he is? Is it something to do with, dare we say it, Betty? On that note, it was a torment of a story from start to finish. We finally got to feel some empathy for Henry, who has an awful time dealing with Betty’s cancer diagnosis.

– Pete’s reconciliation was a fantastic turn at a time when nostalgia is the name of the game. Pete has, seemingly, always wanted to be Don. Except here he’s gone one better. Pete learned his lesson, he loves his wife, and he has managed to get her back in a way Don could never manage.

Classic Doctor Who on BritBox: Earth legends and mythology... May 29, 2022 | Mark Harrison 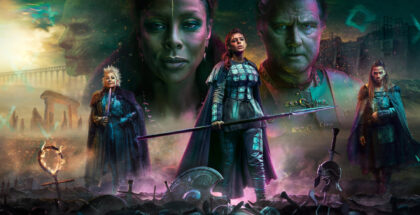