Shudder UK TV review: Creepshow Christmas special (2020) | Where to watch online in UK | How to stream legally | When it is available on digital | VODzilla.co

This enjoyably warped Christmas horror story is knowingly dated - and, in its worst moments, unknowingly so.

Nothing says “long, dark winter nights” like horror movies, so it’s only fitting that, after an animated Halloween special, Shudder’s Creepshow revival should return for a Christmas outing too. With Creepshow’s second season a way off, due to the coronavirus pandemic, it’s a surprise that this festive one-off is a live-action escapade, but it’s a cartoonishly grisly one.

Written and directed by showrunner Greg Nicotero (The Walking Dead) and based on a short story by JA Konrath, Shapeshifters Anonymous introduces us to exactly that: a support group for a bunch of were-somethings who meet regularly to share their bold-altering woes. Into their number comes Robert Weston (Adam Pally), who has been finding suspect items in his poo – items that lead him to worry it might be something more than just food poisoning.

There, he meets Irena (Anna Camp – clearly having a lot of fun), who is a were-cat, Scott (Pete Burris), a were-turtle, Andy (Frank Nicotero), a were-boar, and Phyllis (Candy McLellan), who thinks she’s a shapeshifter but may not be. It’s here that the episode stumbles into problematic territory, with Irena’s main character trait apparently being that she likes sex and Phyllis swiftly becoming the awkward brunt of a lot of lazy jokes. It’s perhaps apt that the most thought appears to have gone into these people’s names rather than them as people.

The episode, though, finds its strength away from its array of human characters and really sparks to life when it delves into the mythology surrounding their animal alter-egos. How that ties into Santa Claus is genuinely delightful, as the show goes all-in on some bizarre twists on festive traditions. It’s far from the wit and heart of Rare Exports, but it is enjoyably warped, and by the time Kris Kringle turns up, there’s no denying the amusingly surreal factor of something so unabashedly dark. The whole thing is presented with knowingly camp effects that help to cover up the more dated elements of the writing – and the result succeeds more as a placeholder to keep Creepshow fans entertained than as a standout Christmas horror in its own right.

Creepshow: Season 1 is available to stream online on Shudder UK, as part of a £4.99 monthly subscription, or £49.99 yearly membership.

12 Days of Netflix: Dolly Parton’s Christmas on the Square 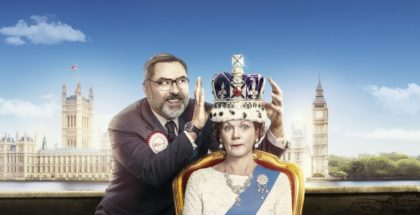