Shudder UK film review: Vanishing on 7th Street (2010) | Where to watch online in UK | How to stream legally | When it is available on digital | VODzilla.co 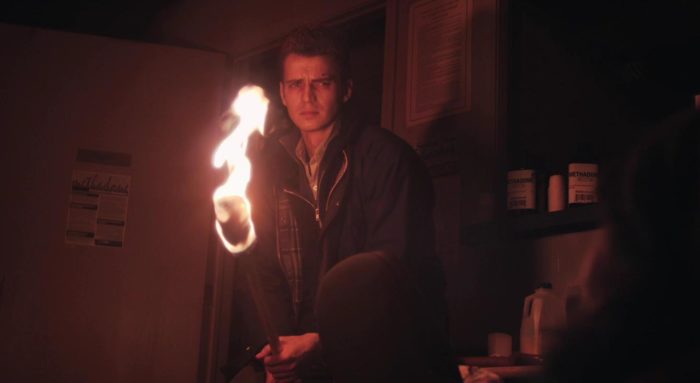 Cinema is a product of the compromising interplay between light and shadow. A balance of both is needed to ensure that we can enter its world of discernible images, as opposed to just seeing its blank white screen, or being left alone in the dark – and while it is, strictly, only the light that we see, our imaginations finds ways of filling in the shadowy spaces between. So self-aware is Brad Anderson’s Vanishing on 7th Street that it is dealing in the constituent materials of cinema itself that the opening credits are illuminated from behind by the flickering light of a visible (intradiegetic) projector, before we are introduced to Paul (John Leguizamo), a projectionist working the booth at a mall’s multiplex – and, in any spare moment he can snatch between changing reels, reading a book entitled Mysterious Dark Matter by the light of the torch that he has strapped to his forehead. Paul has a professional preoccupation with darkness and light. When the power cuts off and all the lights in the building go out, his torch is what keeps the darkness away. Everyone else just vanishes, taken by the shadows and leaving behind only the clothes that they were wearing.

Soon injured and barely alive, Paul is not really the main character in Vanishing on 7th Street, although so very few people are left behind after the film’s obscure overnight apocalypse that he may as well be. Other survivors include selfish TV reporter Luke Ryder (Hayden Christensen), distraught ex-junkie mother Rosemary (Thandie Newton) and 12-year-old James (Jacob Latimore), who all hole up together in a Detroit bar with a generator, and make increasingly desperate plans to escape, or at least to keep the lights on.

Meanwhile, the days rapidly get shorter and strange figures circle in the shadows. Decidedly humanoid, these creatures of darkness also moan and sigh and wail, while playing tricks on the mind to lure people out of the light to those invisible spaces where they are most vulnerable. They are also photophobic, like the monsters in David Twohy’s Pitch Black (2000), Robert Harmon’s They (2002) and Troy Nixey’s Don’t Be Afraid of the Dark (2010) – in flight from the ever dwindling light and always inhabiting the periphery of what the viewer can see.

“The math doesn’t add up,” says Paul, trying to work out whether the world has fallen victim to flesh-eating bacteria, a singularity, a wormhole, divine punishment, alien abduction, Biblical rapture, or who knows what. He is right about the maths, but it hardly matters: what threatens these characters is so abstract and (literally) obscure that it lends itself to all manner of readings, be they physical, psychological, theological or eschatological. The more the film keeps us (like its characters) in the dark, the more evocative and strange its beleaguerment by blackout proves, encroaching with all the inevitability of death, even as our players, entrapped in a black place of grief and guilt, or perhaps in a limbo, keep raging against the dying of the light. As the darkness fills more and more of the screen, we all end up projecting our desires and fears onto its emptiness.

Vanishing on 7th Street is concerned with the triumph of night over day – and these characters’ efforts to keep the darkness at bay are also an attempt to stop the cinema’s screen turning completely black, and thereby keep the show on the road. Ultimately, its themes are existential – and when the lights, in both film and theatre, come back up, the world, although reset, is somehow different.

Vanishing on 7th Street is available to stream online on Shudder UK, as part of a £4.99 monthly subscription, or £49.99 yearly membership.

Disney+ Marvel series will be a key part of MCU