The 2016 Raindance Film Festival takes place in London from Wednesday 21st September to Sunday 2nd October, showcasing web series, VR shorts and indie films from around the world. The Web Fest Awards take place on Sunday 2nd October at 3.30pm. Read all of our reviews of the nominees here – or view the full programme.

MMA is everywhere these days. Don’t know what those letters stand for? Try Blood, Sweat and Chokes, a documentary series that gives us an intimate look behind the scenes at some of the sport’s young fighters.

Playing out over four episodes, the show follows London’s biggest fight club, Premier, for eight months, picking out three fighters as they climb up through Britain’s MMA world, hoping to one day reach the glamourous world of the UFC.

It’s not an easy thing to do, as our trio of subjects face hurdles of differing degrees, from defeat in the ring to injuries outside of it. The show is held together by the common ambition and commitment they all share, which director Sol Rikweda captures on screen with a rough-and-ready handheld camera. That approach gives us a ringside view of the punches and kicks – and while the audio balance is often uneven when we cut between footage, and the show would benefit from multiple cameras to catch both the fighting action and the trainers’ reactions, Sikweda’s intimate access and effective use of music make sure even non-MMA fans understand every blow.

Ren: The Girl With the Mark

Make a note of the name Kate Madison, because she’s a director you should be hearing more of in the future.

Web series are a labour of love that almost always have to punch above their weight – and you can often feel that low budget running through them. Ren: The Girl with the Mark is a fantasy adventure, which automatically makes you think of something tiny filmed in Epping Forest with only a few fivers to rub together, but the show feels as big as they come.

It follows 17-year-old Ren, who one day bumps into a troop of soldiers searching for a pair of mysterious fugitives. A mark by an ancient spirit later and she’s cast out from the village of Lyngarth – and a search for answers begins.

Sophie Skelton, who recently impressed as Brianna in Outlander’s second season, is an immediately likeable lead, and her charismatic performance is backed up by one heck of a production team, who use locations to superb effect. The music is just as impressive, albeit occasionally on the loud side, adding to the expansive, polished atmosphere. Combined with Madison’s direction and some stylish editing, this is a fantasy story that feels familiar but nonetheless stands out from the pack. Episode 1 has had 90,000 views at the timing of writing. It deserves several thousand more.

REN: The Girl with the Mark is nominated for Best UK Series, Best Achievement in Production and Best Directing.

“I’ve got 400 followers on Vine,” says Rich Keeble to his producer and director, Sam LeGassick. “You’ve just got 399,” he retorts.

Their bickering was the highlight of the show’s first season, which saw Keeble recording his vanity project without much success. Season 2 steps things up to something more rounded and substantial, as we watch Keeble attempt to convince Sam to give him a second run. A bit like Alan Partridge. If Alan Partridge was bald, wore glasses and nobody knew who he was. Yes, even after his appearance on the Topcashback advert.

Keeble and LeGassick get far more chance to show off their brand of bickering in this environment, which makes for a funnier watch, with directors Keeble, LeGassick and Edd Wright using the fly-on-the-wall set-up for stunts interacting with the public as well as their own arguments. The introduction of guest stars, too, pays off in dividends, with EJ Martin stealing the show in a hysterical photo shoot episode. The result is a laugh-out-loud comedy that has really come into its own.

Being a teacher is hard, but it’s even harder if you’re having to look after S-Band, a dedicated class for troublesome kids, and you’re being followed around every day by someone with a video camera.

Rowan Lathey is great as the try-hard, fail-even-harder Mr. Thoroughgood, as eager as he is incompetent. (“Student support administrator. It’s just a fancy way of saying ‘not a real teacher’,” sneers a colleague.) But it’s the supporting ensemble who really make S-Band an A-grade comedy, with laughs repeatedly coming out of nowhere to surprise you with brilliant absurd one-liners.

“I’ve never punched a person,” one pupil tells us. “Wait, is a horse a person?”

“I ain’t your friend,” snaps Destiny, who brings her baby (“Destiny’s Child”) into school, after being paired with the bookish, unpopular one in the class. “Aren’t,” comes the reply. “I ain’t your aunt either,” Destiny retorts.

Director Hannah George strings together the sketches with a loose atmosphere that allows for such unexpected giggles, with each episode flying by at a commendable pace. Top of the class.

John Swift is a security driver on the run from the authorities after being accused of stealing some diamonds and killing his colleague. It sounds like the kind of thing you’d find on a Friday night at 8pm, but this is no ordinary show: Shield 5 is a TV show on Instagram.

The social media site is a surprisingly natural platform for storytelling, with director Anthony Wilcox and co-creator Adam Dewar breaking down their thriller into 15-second chunks. It works: the show’s cast manage to convey a lot with a little. One flashback introduces us to Michael Crozier, who’s taken over from his father as the boss of Swift’s security firm – a two-second shot of him leaning back in a chair is enough to tell us all we need to know about him.

If Shield 5 isn’t using cliffhangers to bring people back, it’s jumping to new locations, taking care to make the whole thing seem bigger and more complex that it really is. More variety comes from the inspired decision to use photos (and sometimes videos) as posts between episodes to provide background exposition that would normally be in longer dialogue scenes.

The result is something impressively ambitious and cleverly conceived, but also excitingly challenging, forcing you to piece together the plot as you go. The actors all appear up for the challenge, with lead Christian Cooke moving from romantic to running scared with a visible enthusiasm. This is gripping, admirably efficient and never outstays its welcome – in more ways that one, Shield 5 is the easiest binge-watch around. 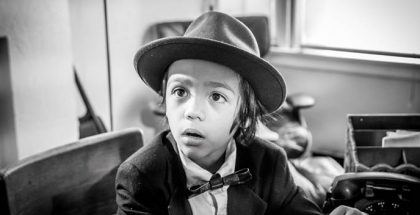