14 things we learned from London Web Fest 2014 about commissioning online video | Where to watch online in UK | How to stream legally | When it is available on digital | VODzilla.co

Raindance’s Web Fest hit London’s West End again this weekend, offering its second line-up of screenings of new and upcoming shows plus a whole range of panels discussing how to make web series and providing tips on everything from distribution to networking and marketing.

We attended “The New Studios”, a Q&A dedicated to the new era of commissioning content for online broadcasters – whether that’s self-commissioning and publishing your own videos on YouTube or getting funded by another company.

Taking part in the debate were:

Sam Delaney (@DelaneyMan), Editor in Chief of Comedy Central – who oversees the site’s online content (including sketches with Slash and Cheryl Cole)

Rebecca Frankel (@rebecca_frankel), Distribution and Brand Partnerships for Little Dot Studios – a production company who provide bespoke videos for various shows or broadcasters, as well as their own content

Eline Van der Velden (@MissHollandUK), Digital Content Producer at Endemol Beyond – whose own Dailymotion show led her to be commissioned to work on Sketch My Life for Endemol.

The panel was chaired by Elisar Cabrera (EliCab), Founder of Digital Creators UK.

Here’s what we learned…

“TV is dying,” says Eline. “We’d like to be part of the new generation.”

Over the years, TV has become increasingly dedicated to serving particularly niche audiences. The panel sees online content as a natural evolution of that focus.

Part of that shift is because broadcasters are trying to find younger audiences. “People who are watching broadcast are skewing older, those who are younger are on VOD,” says Tom.

“Fans are more dedicated to online video than broadcast/linear shows, they help to shape it.”

Comedy Central has had more success with online talent than household names. "They make it, then disappear" – @DelaneyMan #TheNewStudios

4. Everything has the potential to become a series

"50pc of our content is pilots" – @wimbizzle – #mashed. If an idea has potential, they'll look at turning it into a series. #TheNewStudios

Fast turnaround is important in the world of online content, which is quicker than traditional TV.

“If it takes 7 months to develop an idea, maybe it’s not a very good idea,” says Tom.

Pitches don’t have to be long or detailed.

“It can be anything. Two sentences,” says Tom, although character bios, etc, are also welcome.

Rebecca says that nowadays, it’s about just getting something out there, an example of what you can do.

“Put it online,” she says. “It’s not about emails, but “what’s your YouTube link? You’re marketing yourself.”

7. Remember who you’re pitching to

If you want to be picked up by an established brand, e.g. Comedy Central, you need to remember who you’re pitching to.

“[It’s] not just why it’s funny but why it will work, how it fits into our brand,” says Sam.

Rebecca: “The single most important metric is view in the last 30 days… that’s actual viewing going on.”

She recommends SocialBlade, a free tool that provides YouTube metrics.

She adds that you shouldn’t get “super hung up on subscribers”.

Views are more important than subscribers if it’s a pilot or a pitch, says Eline, because you won’t have a developed audience.

To access YouTube’s free Creator Space facilities, you need to have a certain number of subscribers. “If you have fewer than 5,000 subscribers,” says Rebecca, “buddy up – people are always happy to share facilities. There are always ins.”

9. Make sure your tone matches the brand

“Do you want to own your idea or do you not mind where it goes out on?” asks Rebecca. “We commission original content that we own, but we also commission it on your own channel, where we can help with distribution.”

She recommends listing your ideal brands – then a list of more realistic brands, to get an idea of which companies would match your content. “Authenticity is key.”

“Young audiences are very savvy about when they’re being sold something,” echoes Tom. “It’s important that talent makes branded content on their own terms.”

Success is combination of reach and talent, says Tom. If you don’t work with other creators, #mashed are likely to develop partnerships themselves, between animators, composers or writers.

“If you’ve got a script, be prepared to be teamed up,” he warns.

“Every project is a stepping stone to something bigger,” reminds Tom. “We [may] own the IP of a clip, but sadly we don’t own you.”

Rebecca adds not to get hung up on a failed idea: “It’s more important to get something done.”

12. Use a mix of all-at-once releasing or weekly instalments

13. Which platform should you release your video on?

Eline says that Dailymotion really helped her as a young creator, promoting her episodes in 37 countries – something that “would never have happened at YouTube”.

YouTube is the internet’s biggest video search engine, so there is potential for big views, says Rebecca. Dailymotion knows it is the smaller sibling, so they put more effort into support. “YouTube’s answer is always ‘the algorithm’. Dailymotion has people.”

Rebecca argues that YouTube is better for a weekly blog, Dailymotion better for an archive or scripted narrative.

The panel agree that the best philosophy is to put it everywhere.

AOL On will be “really big next year”, predicts @rebecca_frankel #TheNewStudios

Older audiences tend to watch things on VOD that have already been broadcast on traditional TV – not online-first content.

Rebecca says “everyone’s very interested in the older demographic because they have more money to spend”.

Sam from Comedy Central says that as their brand is more connected with/familiar to older audiences, they are looking into Facebook as a potential way to distribute content.

“Older people are on FB,” he comments. “Everyone is. We want to make things that they will share and recommend.”

But it is unlikely that large volumes of content for more mature viewers will be created any time soon:

We’ll see more content for older viewers when current audience is older. It’s what people are comfortable with” – @DelaneyMan #TheNewStudios

Did you attend the 2014 Web Fest? What did you learn? Share any tips or advice below! 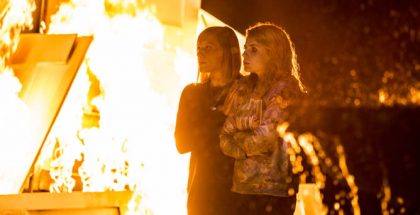