Netflix UK TV review: Better Call Saul Season 2, Episode 10 (Klick) | Where to watch online in UK | How to stream legally | When it is available on digital | VODzilla.co 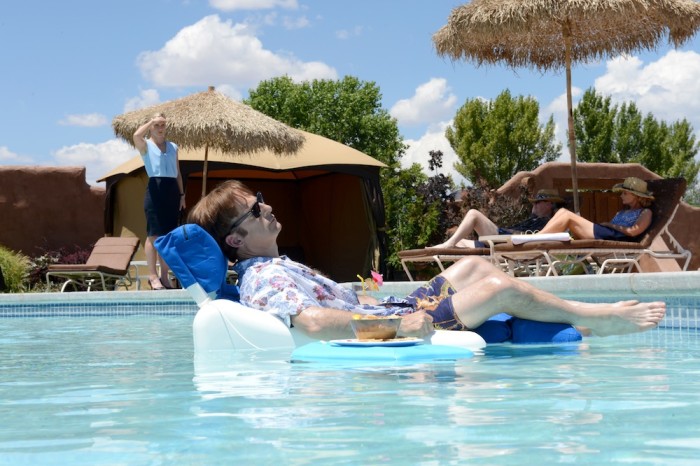 “It’s like he’s out to get you.” That’s Ernesto’s take on the Better Call Saul situation at the close of Season 2. It’s a tiny moment of kindness shown towards Jimmy (Bob Odenkirk), after he rushed into the printing shop to make sure someone called 911 to help the collapsed Chuck (Michael McKean). Chuck accuses Jimmy of being there the moment he wakes up, but Ernesto steps in to save the day. Why? “You’re my friend,” he tells Jimmy privately, before adding that assessment of Chuck’s behaviour. It’s touching, it’s unexpected – and, worst of all, it’s absolutely correct.

Yes, of course, Jimmy ran in to save Chuck – there was never really any question of that, was there? Even with everything at stake, we know Jimmy by now, and we know his weakness; he’s a man of cunning, but also compassion, especially where his brother’s concerned. We know that just as well as Chuck, who is familiar enough with his sibling’s ways that he was able to accuse him (correctly) last week of sabotaging the Mesa Verde accounts. Kim knew Jimmy well enough to realise there was truth to it, but to someone like Ernesto, that kind of outlandish allegation comes across as vindictive rambling. So, just as Jimmy is not only about to save Chuck’s life, but also confess to his crimes, Ernesto steps in and covers for him – no, Jimmy wasn’t waiting at the shop, he claims, saying instead that he called him for help.

If all that sounds like a bit of an anti-climax after that mildly predictable cliff-hanger, you’re not doing Better Call Saul right. Splitting that moment between the penultimate and final episodes of Season 2 is precisely the kind of decision that marks Vince Gilligan and Peter Gould’s Breaking Bad spin-off as a brilliant piece of telly in its own right. That brief pause gives them the chance to insert a flashback at the start of the finale – a cold open that’s colder than most. Here, we see Chuck and Jimmy in the hospital with their dying mum, only for Jimmy to go and get them sandwiches. While he’s gone, their mother passes away. Her final words? “Jimmy.” Does Chuck fetch his brother to say farewell? No. Instead, he cries, until Jimmy returns with the sarnies.

The scene gets right to the heart of the duo’s twisted bond – one that’s both close and full of conflict. Once again, we’re reminded of Jimmy’s charm and likeability, something that even their mum seemed susceptible too. For the first time, though, we have an idea of why the universal affection that other people seem to have for Jimmy bothers Chuck so, from Chuck’s wife to Kim.

It’s a fascinating insight into Chuck’s motivations; for the majority of Season 1, he was the weakest character in the show, hard for us to feel sorry for, with his strange, non-existent illness and seeming irrelevance to the plot. Season 1’s conclusion, though, turned Chuck into something far more interesting than the reclusive older brother: he became the villain. McKean has more than stepped up to the plate, relishing the chance to lord it over Jimmy and trip him up where possible. It’s the opposite of what an older brother should be, and now, we have an explanation of where that bond started to go wrong. If it doesn’t make you feel sorry for Chuck, it certainly turns him into a figure of tragedy as well as villainy – a reminder that Gilligan’s universe is full of such shades of grey.

Season 2 has taken its time to explore the nuances of all of its ensemble, a slow pace that may frustrate some viewers. But it’s that deliberate speed of storytelling that helps to make the show’s small scale seem so significant; in an episode where people could be shouting and people could be shot, one of the main plot points is Kim agreeing to make coffee for clients, a moment that gives us a crucial taste of their everyday professional lives. (Season 2 of Better Call Saul has succeeded in part because of its believable depiction of lawyers doing lawyery things.)

Equally revealing is that the episode’s best sequence occurs without any dialogue at all, as we see Mike (after a nice reunion with his favourite arms dealer) preparing to shoot Hector in the desert. The silence is beautifully maintained, as Jonathan Banks’ car park attendant calmly lines up the sight on his rifle and follows his target in and out of a remote shed. At no point do we cut away from his location to theirs, forcing us to piece together what’s going on through what Mike can see – it’s that kind of directing decision that drives up the suspense in this show, not the fact that anyone’s holding a gun.

In what could be another anti-climax, the most dramatic event to occur in this desert set piece is a mere car horn beeping. The problem? It’s Mike’s car. Who set the thing off while he was playing American Sniper? A tweet from Netflix, which highlights the season’s episode titles, suggests that rearranging them gives you something important. Certainly, if you reorganise them to start with “Fifi” and end with “Klick”, the first letters spell out “FRINGSBACK”. With no sign of Giancarlo Esposito to be found, is Gus the mysterious stranger who left the note saying “DON’T” on Mike’s windscreen?

It’s the kind of teasing question that has defined Better Call Saul – and Season 2’s finale reinforces that prioritising of people over plot. (More important than the fact that someone is staying Mike’s hand is the fact that he refuses to shoot when it might kill Nacho, a glimpse of Mike’s still-present conscience.) The most important relationship of all, though, remains Chuck and Jimmy – and this thrilling climactic chapter reveals Better Call Saul’s second run as a gripping tale of two brothers. Turning the sibling rivalry up to 11, the series has evolved from a tragicomedy about a guy trying to do the right thing into a complicated study of morals, family and loyalty.

Kim got it right in Episode 9, when she defended her partner, telling Chuck he made Jimmy the way he is. As if to highlight just how far McGill has made it down that path to Saul Goodman, we now get to see the advert Jimmy has been making all this time – a cheesy promo (“Gimme Jimmy!”) that’s only a step or two away from the titular slogan of Saul’s later marketing campaigns.

That ad plays in the hospital, as Jimmy waits to find out about Chuck’s condition. McKean is brilliant in these moments, coming out of an MRI in a seemingly self-induced catatonic state – and Odenkirk gets a brief chance to smile, as Rhea Seehorn’s Kim sincerely congratulates him on the TV spot. But just as the advert seems to be bringing in the business – note that Jimmy is, as Kim always suggested, pursuing elder law as his honest vocation – Howard calls to inform him that Chuck has quit HHM and is going mad at home with the kitchen foil.

Sure enough, Chuck’s wrapping up the whole house like it’s a turkey at Christmas, frantically blocking out the electronic magnetic waves he’s so paranoid about – and Jimmy, wracked with guilt about his brother’s decision to retire, finally admits that he did alter the Mesa Verde files after all. The kicker? Chuck’s been secretly recording it all on tape.

It’s a surprising, shocking little twist, one that superbly concludes this two-parter and once again ties the show’s narrative and characters together. The cliff-hanger completes Season 2’s chronicle of a brotherly relationship gone sour (the lighting, once again, surrounds the couple in shadows), and confirms just how similar the two men really are. Both are familiar with their sibling’s ways, each willing to go one step further to hit back at the other; Jimmy knows Chuck and his two-faced ways, but still cares for him; Chuck, on the other hand, knows Jimmy and his two-faced ways, but couldn’t care less, as long as he comes out on top. Using Jimmy’s sympathy against him in such an elaborate ruse is the cruellest thing Chuck has done, carrying out a betrayal that we know will not just bring down Jimmy, but also bring down Kim’s career. It’s bound to prove unforgivable for the younger McGill – when we return for a third season, we know that the two will be irreparable enemies, with surely no more sympathy felt by Jimmy for Chuck. That, more than anything, is the shove that Jimmy needs to become Saul – and Chuck, true to form, is the one who will make him that way. With both actors at the top of their game, the prospect of seeing them go head-to-head with no holds barred is thrilling. After an uneven Season 1, how exciting to see such a confident second season from a prequel that’s successfully carved out an identity all of its own. Roll on Season 3.

Better Call Saul Season 2 is available on Netflix UK, as part of an £9.99 monthly subscription.