Netflix UK TV review: Fargo: Season 3 | Where to watch online in UK | How to stream legally | When it is available on digital | VODzilla.co

Why you should be watching Fargo Season 3 on Netflix UK

Carrie Coon and Ewan McGregor are fantastic in this murderous mess of big characters and petty rivalry.

“I’m just trying to assess the level of stupidity here.”

Returning for a third season, Noah Hawley’s Fargo continues to take the component parts of the Coen Brothers’ 1996 classic and reimagine them to produce new criminal mishaps and bad luck tales.

The inciting incident this time around is the murder of Ennis Stussy, a grouchy drunk who happened to have the wrong name at the wrong time. When parole officer Ray Stussy (an overweight, balding Ewan McGregor) instructs a criminally dim parolee (Monsters’ Scoot McNairy) to steal a personal artefact from his gloating twin brother, Emmit (also Ewan McGregor), it causes a chaotic domino effect for everyone involved.

McGregor’s double turn as Ray and Emmit is one of the real achievements of Fargo’s third season. Pitch-perfect, the brothers are unique, with only their looks and escalating-vengeance to suggest they’re related. Ray is aided by the intriguing Nikki Swango, portrayed brilliantly by Mary Elizabeth Winstead, while Emmit’s business partner, Sy Feltz (Michael Stuhlbarg), stands in his corner – although naturally for Fargo, allegiances are pushed to their limits as the bedlam spreads.

With McGregor filling the Lester Nygaard ‘opportunistic nobody’ role, David Thewlis (Harry Potter) steps in as the resident bad guy. With all of the dramatic inclination and none of the friendliness of Season 1’s Lorne Malvo, Thewlis’ V.M. Vargas exists to pressure Emmit Stussy’s legitimate business, while also making viewers everywhere spectacularly uncomfortable. Repulsive, offensive, and seemingly untouchable, Vargas is one of those fantastic antagonistic creations that make you root for the show’s more petty criminals and murderers.

Luckily, Hawley is more than capable of providing a good-hearted ’Minnesota Nice’ cop who stumbles into the fray. Sort-of Chief Gloria Burgle just happens to be the sort-of daughter of the murdered Ennis Stussy, and sets out to quiet her curiosity by catching his killer, via some cameo-laden multimedia fun involving a cartoon robot, a cocaine-addicted screenwriter, a creepy toy, and a seemingly friendly plane passenger – all of which spurs her relentless quest to work out the riddle.

Played by Carrie Coon (The Leftovers, The Post), Gloria is the beating heart of this season, and does a powerful job of balancing out the threats, bungled plots, and all-out confusion that have become expected of Hawley’s TV anthology. Gloria’s cool-headedness and dogged detecting instincts might cement her role as the viewers’ guide through the melee, but she concludes the season comfortably underused.

The third season is arguably over-complicated, on occasion turning the show’s gleeful irony into engineered convenience, and while very entertaining, the jumble of felonies feels man-made. Still, packed with tongue-tied, humorous dialogue delivered by a host of big name stars, Coon’s caring cop does a fine job of adding some relatability to Fargo’s third round of incompetency-driven murder-mysteries.

Fargo Season 1 to 3 is available on Netflix UK, as part of an £9.99 monthly subscription.

Where can I buy or rent Fargo Season 1 to 3 online in the UK? 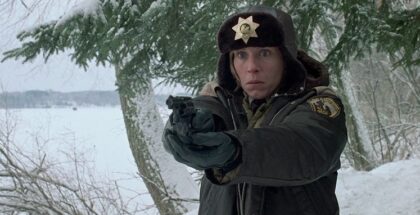