Netflix UK film review: Alex Strangelove | Where to watch online in UK | How to stream legally | When it is available on digital | VODzilla.co

Netflix's teen rom-com is warm, likeable and contains a positive message about sexuality, but the unfunny profanity and sex jars badly.

Before the credits roll, teen Alex Truelove (Daniel Doheny) has courted and started going steady with Claire (Madeline Weinstein) and the two have made plans to have sex – which, for Alex (but not Claire), means losing his virginity. But when Alex meets gay teen Elliot (the smoulderingly hot Daniel Zolghadri, who sci-fi fans will recognize as the spoilt rich kid from Netflix’s Altered Carbon), he begins to wonder if he’s into girls at all.

Though very warm and likeable, with a commendably positive message at its heart, Alex Strangelove is as tonally confused as its protagonist is over his sexuality. In some ways, it’s a cutesy teen romcom, but it lurches – often jarringly – into more adult territory, with awkward sex scenes, drug use and inventive swearing (“suck my anus!” is one of the milder examples) that brings to mind the films of Jud Apatow, only nowhere near as funny.

Despite this unconvincing mix, the movie gets by on its solid story and the considerable charm of its talented young cast. While Doheny makes for a loveable loser we can root for, the outstanding turn comes from his on-screen girlfriend Weinstein (who, her IMDb bio tells us, wants it to be known that she is no relation to Harvey) – already an established Broadway actor, her performance here suggests she could well be a star of the future.

Until then, we’ll have to make do with this modest, slight comedy. Borrowing heavily from other, far mightier teen movies (comparisons of teenage behaviour and the animal kingdom are lifted straight from Mean Girls), Alex Strangelove is likely to go down well with its target audience. For those out of their teens, though, there’s almost certainly something more to their liking available to stream.

Alex Strangelove is available on Netflix UK, as part of an £9.99 monthly subscription. 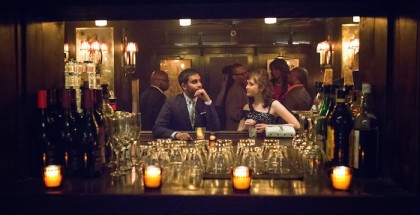