“Too much in Harlem happens in the shadows. That’s what makes you different: they see you.”

Who is Luke Cage? Those who watched the first few episodes of Netflix’s latest superhero series may have been left wondering that very question: in the early stages of the show, he remains relatively undeveloped; an icon more than a character. But Episodes 4 to 7 don’t just give us an answer, they expand on the theme of what a name can mean, building one man’s origin story into a study of identity in modern black America.

Luke Cage. It ranks alongside John Carter as one of the blandest names even seen on screen. But there’s a reason behind our hero’s moniker – and not just because the nickname “Power Man” sounds a bit too silly to be used seriously in 2016. Episode 4 sees our man trapped in the rubble of the restaurant that Cottonmouth has just blown up, as he slowly but surely punches his way out of the wreckage.

That closed-in environment is the perfect opportunity for the show to dive into Luke’s caged backstory, as we flash back to his time in Seagate prison, where he has been framed and dumped behind bars. There, his naturally impressive physique attracts the attention of prison guard Rackham, who has a fondness for forcing prisoners to fight each other for the entertainment of a paying live-streaming audience – an idea that’s straight out of the Blaxploitation playbook, even if Mandingo fighting (hello to Django Unchained) is factually dubious.

Back then, Luke goes by his real name: Carl Lucas. It’s as Carl that he finds himself falling for Dr. Reva Connors, the in-house councillor, who can tell that he’s a decent sort. You know, because he helps her stack chairs after group therapy sessions. It’s the kind of relationship that could easily come across as shallow or unconvincing, but Parisa Fitz-Henley as Reva more than sells it – and Colter, well, just look at him. Even with a great big bushy beard and a jumpsuit, who wouldn’t?

Carl, of course, doesn’t fight for the money or the fame. He does it to protect his prison mate, Squabbles, as well as Reva – a fact that lays the groundwork early for his noble future heroics. So it’s only a matter of time until the age-old phrase “experiment gone wrong” pops up, as Rackham tries to sabotage some flashy healing tech used by the prison doctor to repair Carl following a beating – and inadvertently gives him super-strength. Oops.

A quick swim to shore and a rendezvous with Reva later, and Cage is out of prison, having thrown away the yellow disco shirt he wore when he first went in. It’s a superbly edited sequence – Luke Cage might be the best edited Netflix/Marvel series to date – as we’re served up the parallels of Lucas punching through the jail walls and the concrete blocks under which he’s buried. The montage culminates in him choosing his Biblically-inspired name in the past and announcing his name to the press in the present. It’s hugely satisfying, not just because it finally gives us an origins story for Luke, but because the show understands the importance of history, from incarceration and people exploiting his body for money to Cage choosing his own identity: this is a programme rooted in Harlem and its people, where sharing the past is a huge part of understanding who and where the community is today.

Cage’s name becomes synonymous with that community, as it quickly goes around the town as a symbol of hope, of help. That, of course, riles Cottonmouth, who is trying to establish his own legacy. So a large part of the show’s second act is Cottonmouth waging war on Luke – not on him as a person, but as a name. He retaliates to Cage’s attack on Crispus Attucks by squeezing those under his thumb for more money, something that he tells them is because of Luke Cage.

Soon enough, a whole load of people are pestering him and blaming him for their suffering. Cage, brilliantly, does the simple thing: he helps them.

It’s a mark of how clever the show’s writing is that it manages to foster a sense of Luke as part of the wider society as well as it positions him within the wider Marvel universe – Jessica Jones’ Trish Walker is heard, in talk show form, discussing his rising notoriety. “We’re seeing a shift in the boundaries of possibility,” she observes. “What is scary to some inspires hope in others.” It’s short and subtle, not distracting from the themes at hand. The visuals, meanwhile, treat us to shots of New York with the sun rising; a city galvanised, almost on fire.

“You’re Harlem’s Captain America,” quips Cottonmouth, when the duo face off later on, another understated situating of the show in relation to other comic book entities. (How telling that the nearest equivalent for his black rival to namedrop is a white dude.)

Cage, as in prison, is convinced by others to live up to that comparison. “I don’t wanna be different to anybody else,” he says. “Why hide it?” Claire Temple asks, matter-of-factly.

The return of Rosario Dawson’s nurse is one of the highlights of Episode 4 onwards, and like Cage in Netflix’s quartet of heroes, she slots in seamlessly. Within minutes of her appearing, someone tries to mug her – and she promptly fights back. This is her turf as much as anyone else’s. She, too, after all, has that shared history; she’s returning to Harlem to connect with her mum. “If you don’t fight back, they make you a doormat. You taught me that,” she tells her old lady, reminding us again of how crucial the passing down of messages and examples through generations is; Pop may be dead, but that spirit lives on.

The question then becomes: who can keep it going? Cottonmouth and Cage both have a go at Pop’s funeral, which gives the actors a chance to take centre-stage with nothing but words. Cottonmouth’s eulogy talks of how Harlem isn’t a war zone, but a pasture, a tribute delivered with conviction by Mahershala Ali, who goes on to speak out against “foreign interlopers”, borderline Trump-esque in his rhetoric. Throughout, a jazzy organ plays, almost as if Cottonmouth is pressing the keys himself. Luke, though, goes one better. “I don’t believe in Harlem,” he declares. “I believe in the people that make Harlem what it is.” It’s only a matter of time before he’s in the park, once again explaining historical trivia to bad guys about the place they’re standing in.

Their rivalry is rich territory to explore, as Misty Knight points out that they both have arrogance and ego – and anger – driving them. On one level, the battle for the name of Luke Cage is just a “pissing contest”, and Harlem’s the one having to deal with the splash-back. (Jidenna performing Long Live the Chief emphasises it – the motif of Cottonmouth having singers audition for him in his club remains marvellous.)

Reputation is also crucial for Scarfe, who is under investigation for his dodgy dealings with Cottonmouth, something that Misty won’t believe. His name means something to her. (It sucks twice over, then, that to bring him in, she’s lumbered with the even more corrupt Perez. Can’t a gal get a break?) Scarfe certainly can’t; he gets shot by Cottonmouth in Episode 6 (a disappointingly early farewell to a strong supporting character), the ramifications of which are bad for everyone.

Ali’s excellent turn as Cottonmouth continues, as he moves from the calm, controlled man of the opening to an increasingly petty child; he wants the Judas bullet that Shades says sinister-sounding gangster Diamondback can provide, which would let him shoot Luke Cage and actually injure him, but he doesn’t want Diamondback to take over – a pride that surely spells out his fall. Mariah, on the other hand, is full of ways to kill a man whose skin cannot be broken. Drowning, perhaps. Or poisoning. Out of the two of them, it’s clear who’s living up to the mantle of their mother, Mama Mabel Stokes. More on that later. 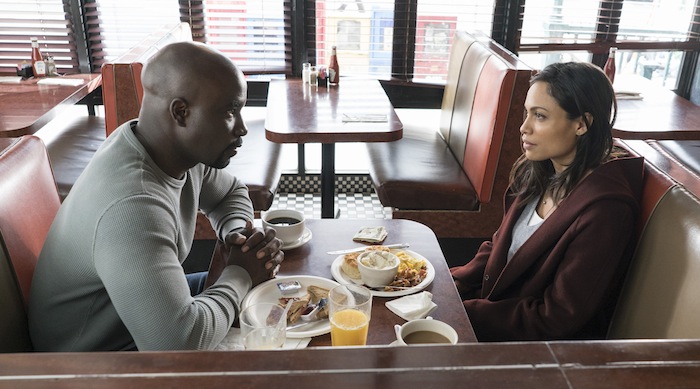 Mum’s the word. It’s telling that, in Episode 6, it’s Claire’s mother’s cafe where Claire and Cage first reunite. (Before she shows up, Ron Cephas Jones’s Bobby Fish delivers one of the programme’s best lines: “Wear a mask,” he advises Luke. “I ain’t no hero,” says Colter. “That’s a great slogan!” grins Fish.) Colter’s smile disappears the moment he sees Claire; that expression alone does miracles for Cage’s character development, containing years’ worth of backstory in a look. Claire, it confirms, isn’t just a tie between the series structurally, but emotionally; nods to Jessica Jones jarred in earlier episodes, but from that moment on, they don’t anymore.

The duo end up a neat double-act, Dawson’s upbeat encouragement providing the positive reinforcement our introverted muscle man needs – and, of course, he asks her out for coffee. Like Misty, Claire knows what that means. Frankly, we’d gladly just watch a romantic comedy about these two getting off with each other.

They end up with Scarfe in their van trying to get him to the cops to bring Cottonmouth down the old-fashioned, honest way. But, of course, Scarfe dies and Cottonmouth gets out anyway. The Stokes name, though, doesn’t escape unscathed. When Mariah does a news interview in her home, it’s clear that the report is planning more than a puff piece – and you can see in her face and mannerisms that she’s none too pleased.

It’s that return to the question of identity that gives us the show’s second big flashback – this time, focusing on the Stokes family. We witness Mama Mabel in action, a force for good as much as bad, exactly the kind of paradox that makes this show’s depiction of Harlem so rounded. Cottonmouth, we realise, isn’t that at all – he’s a kid who wants to play the piano and get a scholarship to explore his talent, not take up the family business. But he’s forced into it, as Mama makes him shoot Uncle Pete (who was abusing Mariah), with the family looking on.

Fast forward to the present day and suddenly, it all makes sense: the portrait of Bigger on his wall isn’t just an icon of thug life, but a musical hero; his sorrowful playing of the organ, his office window bordering on a stained glass window; the way he fails to deal out criminal justice with any kind of real menace. That’s the tragedy of Cornell: he isn’t a gangster. He’s a musician.

It’s a superb reveal to deal out halfway through the series, as we see Mariah’s final ascension to the role of Big Bad – a rise that’s hidden by the non-linear narrative (the show’s themes are intrinsically tied into its structure) until the moment she snaps, fuelled by Cottonmouth’s jealousy-driven accusations that she wanted Uncle Pete’s attention, and beats him to death with, all of the symbolic objects you could choose, a microphone stand.

With his bloody exit, all those stylish sequences of people performing at Harlem’s Paradise, the fact that he effectively made the music club his home, takes on a new relevance. It’s a shock to see Cottonmouth dismissed so early in the show’s first season – although the appearance of (presumably) Diamondback shooting our hero with a Judas bullet promises to keep us coming back for more – but Luke Cage’s first half confirms the show as an engaging drama that’s unafraid to burn slow or introduce big ideas, rather than merely name-drop them.

All episodes of Luke Cage are available on Netflix UK, as part of an £8.99 monthly subscription. 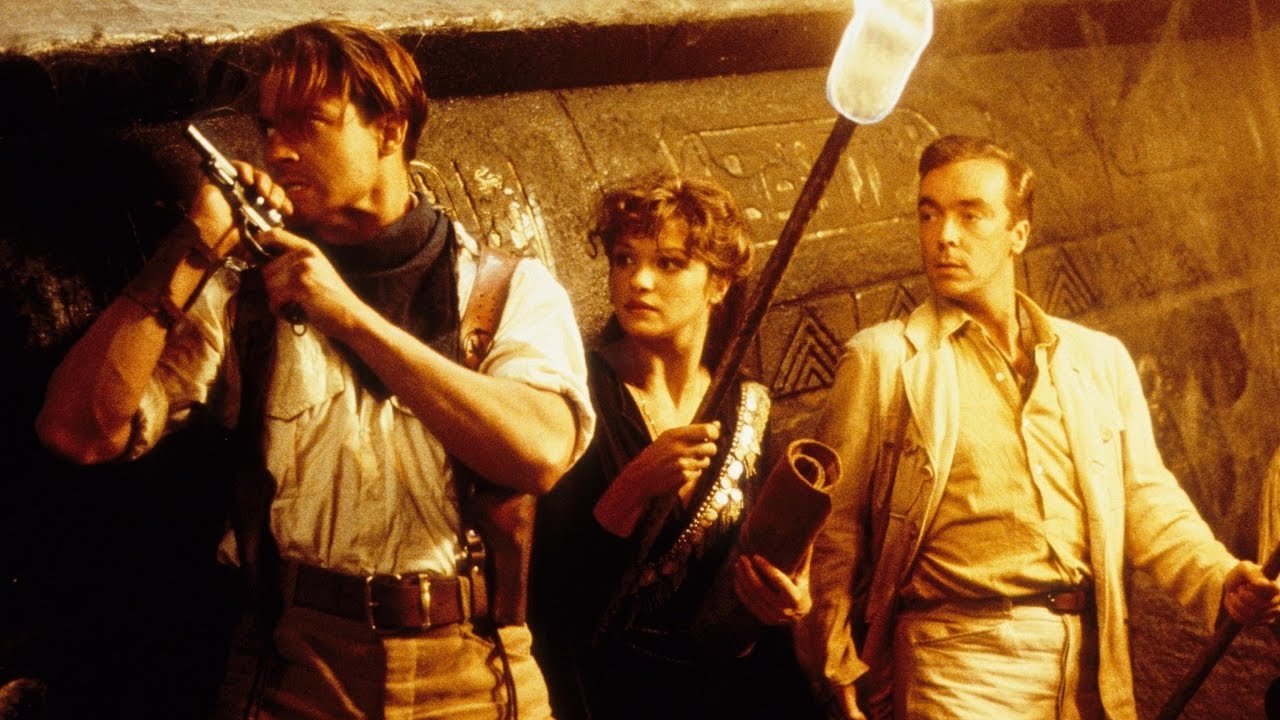