Martin Scorsese's entertaining B-movie is so steeped in gothic horror cliches it almost steps right off the cliff.

You know those films where you can guess the ending from the trailer? Based on Dennis Lehane’s novel, Shutter Island sees Federal Marshall Edward Daniels (DiCaprio) stranded by hurricane in a mental asylum for the criminally insane. He and his partner, Chuck (Ruffalo), are there to find a patient who disappeared from her cell overnight. Can you say “B-Movie horror”? Martin Scorsese can. He just doesn’t always say it very well.

It’s not that there aren’t spooky bits. There are. Fantastically spooky bits. As Edward advances through the dimly lit corridors, wind battering the windows, a sense of unease soaks the celluloid, heightened by Leonardo DiCaprio’s well-developed scowl. But then, as spiral staircases and stone walls begin to creep inwards, Scorsese cuts to shots of WWII. Out of nowhere, we’re looking at Daniels liberating Dachau in 1945, the bodies of dead Jews piling up on the screen. It’s unnerving, but also annoying.

Still, the Nazi connection is important for Laeta Kalogridis’ script, which uses the flashbacks to flesh out Daniels’ dark and disturbed past. Against the suspicious I-want-to-help-my-patients Dr Cawley (Kingsley) and the withered I-helped-the-Nazis-chop-people’s-brains-up Dr Naehring (von Sydow), Daniels looks positively normal, at once suspecting the sinister Shutter Island of dodgier forms of medical practice. Supported by the ever-charismatic Mark Ruffalo, it’s a convincing ensemble of schlocky characters.

Things aren’t helped, though, by the screeching score, which builds up over almost every scene. Sometimes it works, but the inconsistent narrative jumps have a more jarring effect. It makes sense to set up the film’s ending; you just wish it was in a subtler way.

Slumming it through a trashy genre, Scorsese’s Shutter Island is so steeped in gothic horror cliches that sometimes it steps right off the cliff. It’s thanks to DiCaprio’s angry, simmering presence that the screenplay stays anchored to its rock. If not, you’d see it drowning it from a mile away.

Striking shots, reverberating visuals, Shutter Island is a highly entertaining B-movie. It’s just a shame it lasts two and a half hours.

Where can I buy or rent Shutter Island online in the UK? 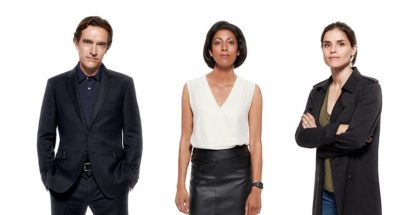