Amazon Prime film review: The Chaser | Where to watch online in UK | How to stream legally | When it is available on digital | VODzilla.co

What with all the Zohans, Shreks and Pirates, Hollywood is often accused of regurgitating tat on a weekly basis. The final strongholds of Cinema, it’s easy to conclude, are located abroad. And so you might be convinced to go that extra mile to see The Chaser, a graphic South Korean tale of murder, hookers and cops.

The directorial debut of Hon-Jin Na, the film follows detective-turned-pimp Joong-ho (Yun-Seok), whose girls are mysteriously disappearing. Is someone poaching his prostitutes? Are they being bumped off by a serial killer? Living on the dark side of Korea’s gritty streets, the former policeman (now pervert) is determined to prevent it happening again. Sure enough, young mother Mi-jin (Yeong-hie) goes missing. The chase begins.

Who is taking them? The answer comes soon enough – it’s not long before the disturbingly-sadistic Young-min (Jung-woo) has Mi-jin tied to his basement wall, chisel and hammer in hand. As blood flows over the white-tiled floor, her owner runs through the city, trying to locate her with nothing but a phone number. Then, a spot of luck 30 minutes in leads to a chance encounter with the killer. A swift pursuit later, he’s arrested. A simple resolution, you might think. You’d be wrong.

The Chaser’s weakness comes from its tortuous depiction of police ineptitude; staggering from one cock-up to another, they seem incapable of locating Mi-jin in time. Caller ID, other missing persons, even a locksmith – there are solutions on hand but the film just isn’t happy with a happy ending. It’s only twice that someone remembers to cut to the poor battered woman in the basement, struggling to escape death.

The gore is piled on in true Korean tradition, but what about tension?

Stranded without a likeable lead, caught between a psycho and an unseen victim, we’re left with little to grip us. Viewing everything through grimy glasses, the streets become less realistic and more of a vague brown smudge. Then the weather takes a symbolic turn for the worse. The rain is superbly shot – and the narrative’s pessimism is a notable statement from the director – but these things do not a gripping thriller make.

The Chaser is available to watch online on Amazon Prime Video as part of a Prime membership or a £5.99 monthly subscription.

Where can I buy or rent The Chaser online in the UK? 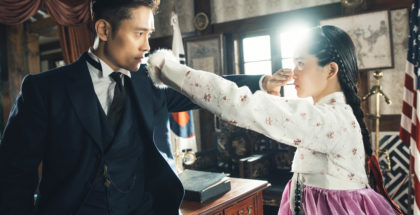