Ben Wheatley: A career retrospective | VODzilla.co | Where to watch online in UK | How to stream

FrightFest continues in London today with the Variety Award being bestowed upon Billericay’s very own Ben Wheatley, director of A Field in England – the first British film to be simultaneously released on VOD, DVD, TV and in cinemas.

One of Britain’s most exciting new directors, Ben’s a genre-poppin’ exponent of smart, deranged psycho pulp. He began his career making internet shorts before honing his craft on TV with shows like Modern Toss, Time Trumpet and the wonderful dealer comedy Ideal.

In 2009, he released his first feature, Down Terrace, a cult favourite and a textbook example of how to take a cheap ‘n’ cheerful concept and run with it. The film also marked the beginning of a beautiful cinematic friendship with Northern Ireland’s premier wit, prophet and generally amazing actor chap Michael Smiley (he’s basically Wheatley’s Harvey Keitel). TDown Terrace was so good that it bagged Wheatley an award for Best UK Feature at the Raindance Film Festival.

His next film sealed the deal. Featuring an intense central turn from Neil Maskell, Kill List remains one the greatest horror films of its generation. By turns laugh-out loud funny, skin-crawlingly creepy and monumentally upsetting (for reals), the film pegged Wheatley as a significant talent.

With his drugged-up Culloden-meets-Jodorowsky opus A Field in England causing something of a sensation on-demand (see Where Can I Watch A Field in England online?), there’s no better time to cast our inquisitive gaze over the early part of Wheatley’s gloriously twisted ouvre.

So here we go. Four films, four visions of England on the verge of a mental breakdown. Open up, and let the Devil in…

Update: See our reviews of High-Rise here and Free Fire here, both available with Amazon Prime. You can also read our review of Happy New Year, Colin Burstead, available on BBC iPlayer, and Rebecca, available on Netflix UK.

A Brighton mob family try to smoke out the informant responsible for putting their son in the slammer. Of course, as the stakes are raised and the walls start closing in, it’s only a matter of time before they turn on their own.

Wheatley’s debut film is a micro-budget marvel about domestic gangsterism in middle England. Filmed in a matter of days for the cost of a packet of fags, Down Terrace does so much with very little. It’s the Argos Sopranos. Bad decisions and the banality of violence given a Pound Shop twist.

Like the early Shane Meadows shorts, the director manages to evoke entire worlds in just a handful of locations. The trick? Richness of character and ambitious writing. Wheatley’s storytelling doesn’t feel inhibited by the natural constraints of the shoot. Instead, the inter-generational criminal intrigue of Down Terrace looks small but thinks big. Think Shakespearean ambition dissolved like Alka-Seltzer after a night on the tiles.

There’s a cantankerous streak, too. A running joke about repainting the breakfast room grounds the drama in a recognisably English, kitchen-sink tableau, while emphasising the callousness of its characters. And yet the film is never twee. A brutal underpass stabbing shows Wheatley at his most ruthless. Violence erupting from nothing, accelerating at a cosmic rate.

Down Terrace is currently unavailable on UK VOD. 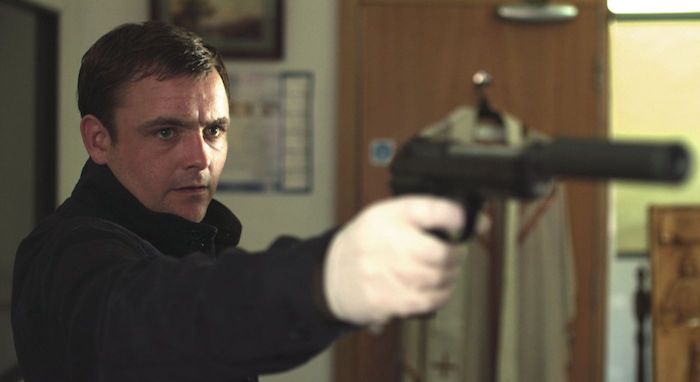 Jay and Gal are ex-soldiers turned small time assassins. Naturally, the dodgy duo run into all kinds of nastiness when hired by a shadowy client to take down a “kill list” of low lives and local officials. As the hits get nastier and motivations turn murky, Jay becomes increasingly paranoid – could he be the real target?

The director’s sophomore feature is a genre-busting one-off, a scuzzy delight that thrills and confounds in equal measure. Reference points? How about the rustic horror of The Wicker Man or Blood on Satan’s Claw? Perhaps even the schizo panic of Shock Corridor? Sure, it’s a little bit gory from time to time, but the visceral terror of blood and guts feels insignificant next to the sheer existential dread invoked by this delightfully nasty, scathingly witty bamboozler.

Wheatley once again uses scale to his advantage and the film has ideas beyond its station. That’s because Kill List isn’t your typical potboiler. It’s practically a treatise on the nature of evil, one that could even question your faith in humanity by the time the credits roll.

And thank goodness for that. How joyous to see a low-budget Brit thriller with such elevated ambition. In the case of Kill List, there’s even a hint that Jay’s fate will have global implications.

If that’s not immediately apparent from a first watch, then don’t worry. Kill List is a droning, petrifying puzzle, and one that rewards multiple viewings. Watch it, freak out, then watch it again.

Kooky couple Chris and Tina take their first ever holiday together, an eye-opening caravanning odyssey through the English countryside. Not before long, dark secrets are revealed, and suppressed urges come to the fore. This is no ordinary romance. This is murder most horrid.

Painting on his broadest, most eccentric canvas yet, Wheatley turned to TV regulars Steve Oram and Alice Lowe for his third film. Sightseers is a macabre affair that’s part Countryfile, part 10 Rillington Place. It’s a melancholy road trip with a big heart and an escalating body count. A picture postcard signed in crimson ink.

In many ways a less enigmatic film than Kill List, and possibly a little too quirky for its own good, Sightseers takes the most innocuous attractions (the Keswick Pencil Museum, anyone?) and turns them into a sinister milieu of chaos and death.

And yet it’s utterly charming, perhaps even a little… heartwarming? There’s a real tenderness at work here, with Oram and Lowe showing easy, deadpan chemistry as bloodthirsty misfits at odds with the expectations of the modern world.

At times the film feels genuinely subversive, and the humour is drier than the Atacama desert. Regardless, it retains a kind of oddly delicate beauty. Check out the image of a burning caravan at a key moment; a poignant end to the lovers’ grand rural dream.

It’s the English Civil War. A small band of deserters get kidnapped by a mysterious Irishman. He immediately sets his captives to work on a delirious treasure hunt that drives them all to the edge of sanity. Just who is this curious sorcerer? And what evil grows within these pastoral lands?

This elliptical yarn is perhaps Wheatley’s eeriest, most uncanny work to date, a psychedelic Catherine wheel of a film that baffles and dazzles and generally messes with your cognitive well-being. By the time it reaches its trippy, dazzlingly edited finale, it’s less of a film, more a full-blown neurological assault. The ultimate Midnight Movie, in fact.

It also features one of the most outrageous and unsettling sequences you’ll see on the screen this year – Reece Shearsmith’s errant alchemist Whitehead, tied to a rope, mentally stewed on ‘shrooms and magic, slowly emerging from a wizard’s tent, his face paralysed in a nether state between fear and joy. A single, overly extended slow motion shot that prolongs the terror and wrecks the nerves. It takes just a couple of minutes for Wheatley to give us his finest moment, and blow our minds in the process.

No wonder he won that award.