UK TV review: The ABC Murders | Where to watch online in UK | How to stream legally | When it is available on digital | VODzilla.co

Identity and alienation are the driving forces in this darkly gripping take on Agatha Christie's Poirot.

“I’ve lived in this country for 19 years and people still think I’m French,” laments Hercule Poirot in The ABC Murders, a drama that gives us a version of the detective unlike any we’ve seen before. The Belgian sleuth is one of the most familiar crime-solvers on our screens, with countless incarnations over the years. Seeing John Malkovich in his shoes, then, is a jarring contrast to David Suchet, arguably TV’s definitive Hercule. This Poirot is older, quieter and sadder. He doesn’t even has his trademark moustache.

That alienating feel of first clapping eyes on him, though, is precisely the point. The three-part series is written by Sarah Phelps, a master of adapting Christie’s work for television who always finds something new to bring to each tale. Here, she bumps the original book back a few years to take us to the early 1930s, at a point when right-wing rhetoric was moving across the UK, when the nation’s divisions were only matched by its suspicion. For Poirot, who has long been a feature of the London social scene, it’s a time of detachment and exclusion, and Phelps doubles down on that feeling of isolation; Poirot here is at the end of his career, has already enjoyed his time in the limelight, and now, his affectations such as the dyed moustache are now mocked attempts to preserve his preening appearance. How fitting, then, that his facial hair is now a grey goatee, much more underwhelming than his legendary reputation would have us believe.

He’s not even invited to help the police in this story; as in Christie’s original, Poirot receives a letter directly from a mysterious villain, known only as “ABC”, who taunts him with details of deaths that will unfold across the UK in alphabetical order. Alice Ascher in an Andover tobacco shop is the first victim, followed by cafe waitress Betty in Bexhill. When Hercule begins to investigate, he finds Inspector Japp (a melancholic Kevin McNally) no longer there, replaced by Inspector Crome (Rupert Grint), who doubts Poirot’s abilities. But rather than go for the obvious double act, Phelps’ drama keeps Poirot on his own without someone on shoulder – Captain Hastings, too, is nowhere to be found. And so the only person left who communicates with Poirot, or seems to understand him, is the killer himself.

That strangely personal connection is contrasted creepily with the format in which they communicate; Poirot receives typewritten letters from the murderer, an impersonal form of messaging through modern technology, a darkly disturbing parallel to the train lines that run between each victim, or even the hate-filled tweets that fly over the web today.

Grint is a great fit for this world, conducting his police business with a forward-thinking competence but little respect for what’s gone before; Japp and Poirot are yesterday’s news, as he tries to keep the police work efficient enough to get public-pleasing results. Malkovich, meanwhile, grows on you with his subtle interpretation of Hercule, allowing him to be far more vulnerable than we usually see, with the pride of his youth humbled, even though his intellect is still sharp. He speaks with a precise Belgian accent, almost too precise, as if Poirot is choosing his words and pronunciation to emphasise his real nationality. Most of all, he’s got no partner to spar with or show off to; he’s a solitary figure, muted, kitted out in sombre greys, a fitting opposite number to a suspicious travelling salesman, played with a sickening disposition by Eamon Farren.

Director Alex Gabassi leans into that mood by giving period Britain a glossy, but gloomy sheen, matched by the twisted (literally) opening title sequence. It’s a dark glass to look through onto our nation’s past, and Phelps has composed a gradual, gripping thriller that challenges Christie’s detective to do the same. Integrity is at stake, as well as people’s lives, and as we see Hercule wash out his moustache’s colour, the result is a shrewdly judged, impressively mounted story of an identity slowly being reclaimed; a mystery slowly being pieced together. That mission statement perhaps goes one step too far come the finale, which brings us a fiery backstory that’s entirely new to Phelps’ interpretation of the detective – although she uses a vocal tic of Hercule as her jumping off point. But, almost as if she knows she’s getting carried away with the revisionism, it’s pleasingly balanced with a dash of old-school Poiroting, including a bit with a dinner party and even an old stately home. It’s in the balance between traditional conventions and new tricks that The ABC Murders really finds its groove – and, in the case of one scene involving railway lines, some properly nail-biting tension. Despite the odd bump in the tracks, Phelps and the BBC have done it again.

Where can I buy or rent The ABC Murders online in the UK?

Angela’s Christmas: An enchanting fable of family and love 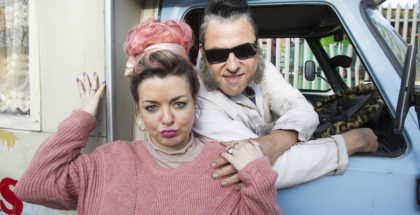