“Death intrigues me. Death of children. Death of friends. Yet my own death continues to elude me.”

Death is a huge part of all cultures around the world and one of the things that marks Michael Hirst’s Vikings out as so successful is its ability to understand its subjects’ attitude to death – and, in particular, that of Ragnar Lothbrok. Ragnar has always been driven by legacy, by spreading his reputation through his own actions and his sons’ actions. After coming so close to Valhalla’s door, though, and being refused entry, he’s now a man more lost than before, at times almost showing resentment for his post at the head of Kattegat. There’s a genuine sense that this season could be the one where we finally bid farewell to Travis Fimmel’s magnificent lead character.

Yidu is the principle source of fascination among the secondary faces, at least as far as Ragnar is concerned – as with Athelstan before her, she represents something foreign and new, something to be understood. And so his monologue about death occurs not during an exchange with another major character, but with her – a move that he repeats several times, shirking communal dinners and celebrations (Episode 4 is set at Yol) to converse with the slave. And also to partake of her mushrooms, which give him a high that makes him prone to spouting philosophical nonsense. (Fimmel’s smirk has never been wider.)

“In my world, it is beloved that the day of your death is fated,” she retorts. “You must have a life worth living.”

As Ragnar and Yidu grow closer, though, he and Aslaug fall further apart – but rather than him just hitting her, as we saw in the earlier episodes, Hirst teases out their domestic discord in a subtler way: by focusing on their children, specifically, Ivar. Aslaug accuses her husband of being a bad father, because he doesn’t under what the boy wants, and that’s something that hurts him more than anything else she’s ever done – even her infidelity didn’t strike such a harsh blow. To make matters worse, she brings the crippled boy to Floki to learn how to become a Viking – a low dig, indeed.

Ragnar’s other son, Bjorn (Alexander Ludwig), also continues to enjoy more and more screen time, as he fends off that bear (hello once more to The Revenant) and returns home. It’s not long until he discovers it was Erlendur who set the berzeker upon him and even less time until he takes revenge in a surprising, clever way: by claiming his wife, Torvi, as his own and asking her to go with him to Kattegat. His proposition to Torvi is a revealing insight into the way that women are regarded in Viking society, as well as a chance for a female to have decisive agency in the narrative. That only becomes even truer when Erlendur gives one condition for her departure: leaving behind her child, a sacrifice that both emphasises the strength of her sacrifice and reinforces her status as property that belongs to a man.

Bjorn and his dad are thrown into notable union when King Harald arrives at the end of Episode 4 – a man whom neither of them trust very much. It’s no coincidence that the two men are at their closest when it comes to their dealings with other leaders, rather than a connection based on pure affection. But the show does find time for a sweet character beat, as the pair bond over daddy issues; Ragnar questions Bjorn’s separation of Torvi and her child, only for Bjorn to rebuke Ragnar for his own parenting skills.

“It is not easy being a father,” admits Ragnar, delivering his second significant monologue in as many episodes. “It is even harder to be a husband. Maybe I have failed at both.”

(The importance of parenting as a theme comes to the fore once again in Ragnar’s conversations with Yidu, as she claims to Ragnar on multiple occasions that her dad is the emperor – something Ragnar is both intoxicated by and dubious of. Who is she? And what role will she play in the future?)

Two people who aren’t having any trouble in the parenting department are Rollo and Princess Gisla, who, after their previous tiffs and near-divorce, have finally managed to communicate, thanks to Rollo’s efforts to learn French. The result? An extremely happy couple, who have no problem with bashing the baguette, so to speak. After Clive Standen’s display of both shame and loneliness, it’s a joy to see him smiling – and, in one hilarious scene, bonking in the bedroom, while everyone else celebrates Christmas (it’s Yol, remember?) in the dining room.

The contrast between public and private is astutely observed, not just because Hirst and the cast understand the value of humour as well as heavy drama; while Ragnar’s shying away from the limelight potentially weakens him as a ruler, Rollo and Gisla’s retreat only makes them a stronger power couple. And they really are a power couple, as she realises that her father needs a strong man to help defend the city from the looming Viking re-invasino. “He has Count Odo,” offers Rollo. “I don’t like Count Odo,” comes the brilliant reply. With her feisty side on display, Gisla becomes more and more our favourite with every episode – not least because her and Rollo’s steamy union spells the eventual end for Count Odo and all those other French court subplots that have been the weakest parts of this season.

Speaking of which, what of Ecbert and Judith back over in England? Their bizarre relationship only gets weirder and weird as the season unfolds; on the one hand, it’s nice to see her genuinely happy about her seeming freedom, while on the other, it’s intriguing to see how every “freedom” granted her really makes her more subject to Ecbert’s control.

Having rescued Kwenthrith, Ecbert decides that (you guessed it) an invasion of Mercia is need to restore her to her throne, just in case we had any doubts about his power-hungry ambition. Queen K’s and Aethelwulf’s relationship spells interest for the future – “Wife, come to bed,” he demands of Judith, “or sleep with your father” – but it’s Linus Roache who makes this whole strand of the story watchable, as you wonder just how deep he’s willing to sink to get what he wants. “I need to know I can trust you,” Queen K tells him in a heart to heart. “What possible reason could you have no to trust me?” he smiles back, practically sticking a forked tongue in his face. Even the glimpse of him praying about his “unforgivable” carnal, venal and whatever-else-you-care-to-name sins is disturbing rather than redeeming.

The result are a pair of episodes that place a growing emphasis on the rest of Vikings’ cast, apart from Ragnar. Floki, who was once a tired enemy, now has mileage as a mentor of Ivar, and Yidu’s own motivations remain satisfyingly ambiguous. The underlying fact that Aslaug’s actions could be designed to unseat Ragnar, meanwhile, adds a political heft to the private bickering – and familial feuds, as Ivar’s shocking bit of axe-wielding at the end of Episode 5 reminds us, never bode well for Vikings.

Just ask Lagertha, who appears to embrace Earl Kalf, even as he plots to use Torvi and her to spy on Bjorn and Ragnar. “Lagertha must never know what we did,” he tells Erlendur, effectively sealing his fate. And sure enough, following a gentle proposal, and a brief glimpse of their apparent sweet union, she dispatches him with the brutal resourcefulness that has made Katheryn Winnick’s Lagertha the most promising supporting character of all. When she’s around, other people’s deaths have no trouble eluding them. Long may that be the case.

Vikings: Season 4 is available to watch online in the UK on Amazon Prime Instant Video, as part of a £5.99 monthly subscription. New episodes arrive every Friday, within 24 hours of their US broadcast. Seasons 1 to 3 are also available. 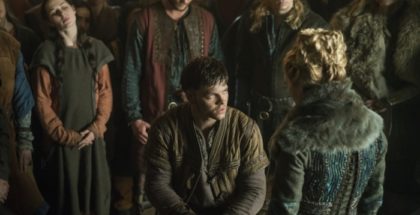