12 Days of Netflix: Angel of Christmas | VODzilla.co | Where to watch online in UK

12 Days of Netflix: Angel of Christmas 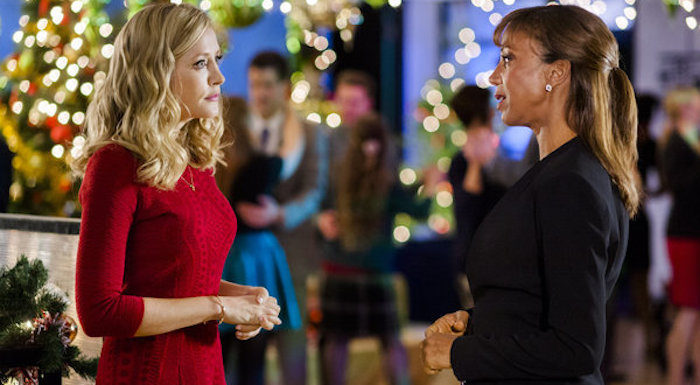 A fate-driven attempt at a disposable holiday flick.

“I have a complicated relationship with Christmas.”

Susan (Finnigan) is a straight-talking, no-whimsy copy-editor for a newspaper – constantly dreaming of being a fully-fledged writer. And so she has to put her distaste for Christmas aside, when she snags a chance at the big Christmas story, for which she elects to write about a family heirloom: the angel of Christmas.

Repeatedly running into successful artist Brady (Scarfe), Susan begins to notice how often her family heirloom points her in the direction of happiness. The result is a fate-driven cheese-fest, but the simplicity of the film might actually be one of its strengths.

Susan’s crisis of happiness, mixed with her lily-white, upper-middle-class existence – coupled with a slimy male co-worker – puts her in the perfect position to drive a cliché-based TV movie. The writing is, naturally, barely deep enough to keep any interest, and the performances are little better. It is a very good attempt at a terrible, half-baked, simplistic Christmas flick.

At the heart of it, however, there is some wonder. Susan’s titular Angel of Christmas is constantly around during her toughest moments, having meaning assigned to it, regardless of her no-nonsense sensibilities. It’s a fitting metaphor for the magic that exists at this time of year, and an important note for any younger viewers who may happen upon it: the magic of Christmas is always that people want Christmas to be magical.

Aside from that oft-underwritten core idea, Angel of Christmas is exactly what you expect it to be. It’s straightforward and easy-to-follow. Its consistent nature does create a well-rounded story, filled with two-dimensional characters and predictable notions. Desperate to emulate Bridget Jones in any way, Ron Oliver’s cheap holiday flick is a by-the-numbers attempt at disposable Christmas fare. It carries it off perfectly.

Angel of Christmas is available on Netflix UK, as part of an £8.99 monthly subscription.