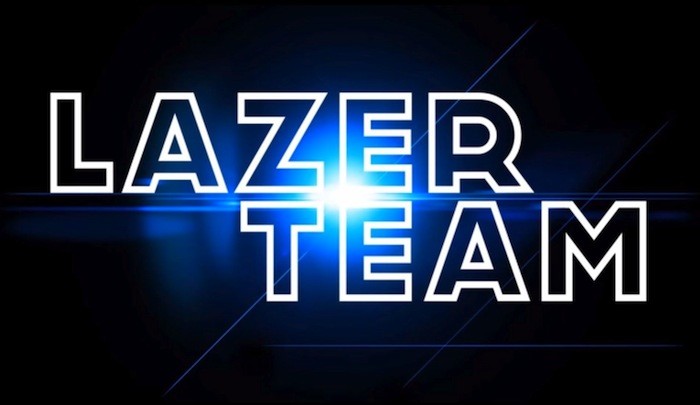 We continue our look at YouTube Red’s first wave of originals with Lazer Team, the feature-length outing from Rooster Teeth.

It’s hard to define what Lazer Team is as a piece of entertainment, is it an indie movie with something to say? Is it a sci-fi comedy B-movie filling a gap in the market? Or is it the first commercial release from a bunch of YouTubers and a sign of things to come? What can be said for Lazer Team is that it is a love letter to Internet culture that has arisen in the last decade and ultimately made the film possible. But while its classification as a YouTube Original can only be applied in name only, as there is very little originality to be found here, it is still a fun romp with plenty of spectacle and some good ideas.

The plot centres around three nobodies from Texas discovering a suit of alien power armour and becoming embroiled in a battle to save the planet from extra-terrestrial aggressors. That’s about it, there’s not really any deeper plot than that, which is a little disappointing given that this film comes from the minds that taught the world what a web series is. That’s not to say the writing isn’t good. Quite the opposite, in fact. The humour is the film’s highlight; it treads the line between witty and crass in such a way so as not to feel alienating. There are excellent gags about excessive use of social media, popular culture, some great slapstick, and, of course, male genitalia. They’re liberally peppered throughout proceedings to stop the predictable narrative from dragging.

The humour emerges, for the most part, from the interplay between the four main characters. The Lazer Team is made up of: Hagan played by Burnie Burns, a beaten down, local sheriff, and Zach, the arrogant jock played by Michael Jones (already these aren’t even close to original characters). It doesn’t get any better with the other two members: Herman, a washed up drunk played by Colton Dunn, and Woody, a dumb redneck played by Gavin Free. Despite the clichéd nature of the characters and that Dunn is the only professional actor of the ensemble, their interactions are great fun to watch.

Burns does a competent job of playing the exacerbated leader of the group. Michael Jones suffers from a slight case of playing himself but manages to bring it when it counts. Meanwhile, Dunn steals the show bringing his comedy chops from Key and Peele, among other credits, meaning his delivery is on point every time he’s on screen. Englishman Gavin Free manages a credible Texas accent but also ends up playing himself, although his bumbling saves his performance.

One of the most disappointing elements of Lazer Team is its complete lack of credible female characters. The only female of any significance is Hagan’s daughter, Mindy, played by Alexandria DeBerry. Her only purpose is as the love interest and she’s only given more to do when she transforms into what is essentially a different character. For a film that beats its audience over the head about how in touch with the zeitgeist it is – demonstrated by the media excerpts that are pulled from the pages of YouTube, for example – this lack of female representation is almost unforgivable.

This might spoil the film were the overwhelming sense of fun and homage not there to distract. Lazer Team feels like it was made during the late 90s or the early Millennium – and that’s a compliment. The visual effects seem almost deliberately low-fi to give that ‘we’ve just started using CGI’ feel that populated big movies of the time. Conversely, the action sequences feel like something out of the 80s; they are intimate affairs in scope, but deliver well paced, bombastic scenes with some great pay-off and thrilling set destruction. These scene, in particular, are well scored with the film’s soundtrack having undertones of John Williams, which is ironic considering the man in charge of music is named Jeff Williams.

Ultimately, as essentially a big budget indie movie made by passionate people and part-funded by passionate fans, Lazer Team is a fine tribute to the better parts of Internet culture. Whether that’s enough to justify its lack of originality or make it less reductive is a grey area. The film doesn’t break the mould, despite its origins and the people who made it. But if this is the calibre of production that can be expected from future YouTube Red offerings then the subscription service could be a great place for fresh talent to thrive. Take that, Internet.