Trailer: The Young Offenders return for Season 3 this July | Where to watch online in UK | How to stream legally | When it is available on digital | VODzilla.co

Trailer: The Young Offenders return for Season 3 this July 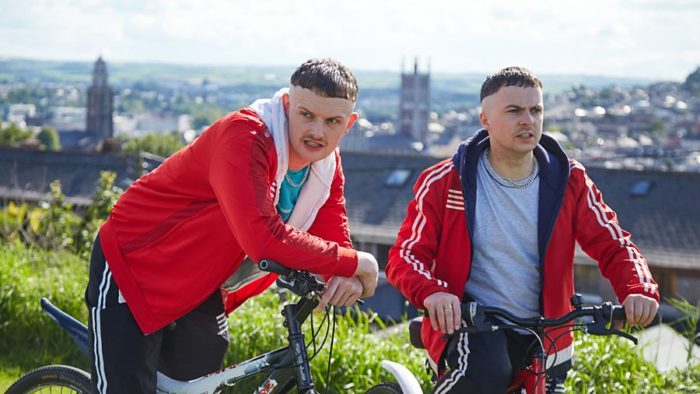 “Try not to do anything illegal for the next 24 hours.” “How are we supposed to know what’s illegal?” That’s the sound of BBC Three’s The Young Offenders returning for a third season – and the new trailer promises it will be as hilarious as ever.

Created by Peter Foott, the hit Irish comedy tells the coming-of-age adventures of Conor (Alex Murphy) and Jock (Chris Walley) and their mother/guardian Mairead (Hilary Rose) as she tries to keep them on the straight and narrow.

“Expertly performed, smartly written and very, very funny” is how we described the show in our review of Season 2, which premiered last November. Racking up more than 4 million requests within a month, it was no surprise that the Beeb swiftly announced a third season – in fact, it was already filmed back to back with Season 2 last summer.

Now, we finally know when we can see that third season, with Conor and Jock returning to our screens on 19th July. Here’s the trailer:


The Young Offenders will return to BBC Three for Season 3

BBC Three has renewed The Young Offenders for a third season – and it’s already been filmed.

The hit Irish comedy from producers Vico Films will be back on BBC Three in the new year. Created by Peter Foott, The Young Offenders tells the coming-of-age adventures of Conor (Alex Murphy) & Jock (Chris Walley) and their mother/guardian Mairead (Hilary Rose) as she tries to keep them on the straight and narrow.

The best friends navigate their awkward teenage years, hatching plans and adventures to help distract from their tough home lives and their inability to stay out of trouble.

The whole second season launched as a BBC iPlayer box-set earlier this month and has picked up 4.1 million requests so far. Combined with the 13.5 million for Season 1 and last year’s Christmas special, that makes over 17.6 million requests to date.

“Expertly performed, smartly written and very, very funny” is how we described the show in our review of Season 2.

Fiona Campbell, Controller BBC Three, says: “At BBC Three, we love championing local voices and The Young Offenders are a brilliant success story for us. With great characters and on-point writing that is hugely relatable to our audience, we’re delighted they’re coming back for another season.”

Peter Foott, creator of The Young Offenders, says: “We are so grateful to BBC Three and thrilled that they had such faith in the stories and characters of The Young Offenders that they commissioned a third season from us. We had a lot of fun filming Season 2 and 3 back to back over the summer in Cork, and we can’t wait for everyone to see more of Conor, Jock, Mairead and all the characters next year.”

The Young Offenders has been commissioned for BBC Three by Fiona Campbell, Controller of BBC Three and Shane Allen, Controller, BBC Comedy Commissioning. The Commissioner for the BBC is Alex Moody. The Executive Producer for Vico Films is Peter Foott, the Producer is Tim Whitby.

The Young Offenders Season 2 continues on Monday nights on BBC One and is available on BBC Three and BBC iPlayer.

The Young Offenders Season 2 is on BBC iPlayer until November 2020. Season 1 is available until June 2020.