First look at Stephen Fry's Cuddly Dick (in Yonderland) | VODzilla.co | Where to watch online in UK

The actor, comedian and all-round national treasure signed up to the family-friendly fantasy at the start of the year, just in time for its new run, which arrives on Sunday 16th October on Sky 1. He plays Cuddly Dick, a “charming, avuncular and eccentric former Elder who returns to Yonderland after having been imprisoned for years by Imperatrix”.

It’s a time of peace and prosperity in Yonderland. Debbie (Martha Howe-Douglas) has fulfilled the prophecy that brought her, via a portal in her kitchen cupboard, to Yonderland as the Chosen One, and her arch-nemesis Imperatrix is gone. Meanwhile, in the real world, Debbie’s husband Peter (Dan Skinner) has been offered a promotion that means the family must relocate to Glasgow. After the arrival of the long-lost Elder Cuddly Dick, Debbie feels she can leave the realm in his safe hands. But is she really ready to leave Yonderland forever?

“We’re overjoyed to welcome the brilliantly original Yonderland back to Sky 1. And now with added Stephen Fry! Cuddle up – Sunday teatimes may never be the same again,” says Jon Mountague, Head of Comedy at Sky.

Not got Sky? You can stream the show live and on-demand through VOD service NOW TV, which gives you access to Sky TV shows for £6.99 a month, no contract. Season 1 and 2 are both available on Sky On Demand and NOW TV. If you need more convincing of Yonderland’s brilliance, read our glowing reviews of Season 1 here. Or hit the button below to start watching with the family.

Yonderland will return for a third season this year, with Stephen Fry joining the cast.

Sky 1’s fantasy comedy series, created, written by and starring Mathew Baynton, Simon Farnaby, Martha Howe-Douglas, Jim Howick, Laurence Rickard and Ben Willbond, is one of the channel’s undisputed highlights, as we follow housewife Debbie, who discovers that she is the chosen one foretold to save the eponymous world.

Filming will commence this spring on the show’s third run, with Stephen Fry starring as Cuddly Dick, a former Elder who returns to Yonderland having been imprisoned for years by Imperatrix. Cuddly Dick is described as “a charming, avuncular eccentric who loves nothing more than to spread love and kindness (as well as plenty of hugs and kisses)”. Meanwhile, with Imperatrix gone, Negatus now answers to no one and can seize control of Yonderland for himself. But will his fellow Overlords have other ideas?

Debbie, having allied with her evil sister to destroy the weapon she created, has finally fulfilled the great prophecy, ushering in the mythical Second Age. But will it be a time of peace and prosperity, or will an even darker cloud spread across the land? And with Peter (Dan Renton Skinner) planning to move the family in the real world, what will happen to Debbie’s magical portal in the kitchen cupboard?

Yonderland was commissioned by Adam MacDonald and Jon Mountague and will be produced by Imogen Cooper for Working Title Television. The executive producers are Alison Carpenter, Tim Bevan and Eric Fellner for Working Title, and Ben Boyer for Sky. The series will be directed by Steve Connelly and David Sant.

Commenting on the commission, Adam MacDonald, director of Sky 1, says: “After two successful series, it’s extremely exciting to be bringing back Yonderland to Sky 1 for a third adventure. The creative team and cast are exceptionally talented and this weirdly wonderful show is well-loved by our audience. With the brilliant addition of Stephen Fry, this is a comedic treat for the whole family.”

Working Title Television’s Tim Bevan and Eric Fellner adds: “We are delighted to be bringing Yonderland back for a third series. In Cuddly Dick, our incredibly talented writers have created a very funny and surprising character to add to the other assorted idiots of Yonderland, and to have Stephen Fry joining to the team to play him is the icing on the cake. We could not be more pleased.” 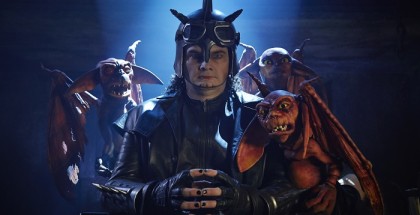