Trailer: Last Chance U Season 2 kicks off this July | Where to watch online in UK | How to stream legally | When it is available on digital | VODzilla.co

Trailer: Last Chance U Season 2 kicks off this July

A new season of Last Chance U kicks off this July – and we have our first look at the athletes back in action.

The award-winning documentary series, which follows players on a quest for redemption on the field, in the classroom and in life, was one of last year’s surprise smash hits of the summer. Inspired by a feature article in GQ magazine, the Netflix original show follows the stories of elite athletes in tough life circumstances who struggle to realise their dreams on a champion junior college football team.

Season 2 follows the next group of young men at East Mississippi Community College – along with Coach Buddy Stephens and Academic Advisor Brittany Wagner – as they work to become the future stars of the NFL.

All episodes will touch down on Netflix on Friday 21st July – and, in case you’ve forgotten just how gripping the first season was, here’s the new trailer for Season 2 to remind you what’s in store. For more on what’s coming soon to Netflix UK in July, click here.

Netflix has renewed Last Chance U for Season 2.

Season 2 will focus on players at East Mississippi Community College. Under coach Buddy Stephens, the college has won multiple national championships, with nine of the coach’s former players currently in the NFL.

Greg Whiteley will stay on as director for the second run.

“We are thrilled to continue our relationship with Greg Whiteley, who has genuinely captured both the struggles and triumphs these young men face in a world that often seems designed to hold them back,” Netflix VP for Original Documentary Programming Lisa Nishimura said in a statement. “Coach Buddy Stephens, academic advisor Brittany Wagner and the entire team at EMCC have bravely opened their doors for the filmmakers to capture their real world as it unfolds. We eagerly anticipate having a front-row seat as they continue to fight for their dreams in the coming season.”

This summer is officially all about sport, from Wimbledon and Euro 2016 to the Rio Olympics. Now, Netflix is getting in on the game, with its first original sports docuseries.

Last Chance U is a six-part, behind-the-scenes look at the world of college football. Directed by Greg Whiteley (Mitt, New York Doll, Resolved), it follows a group of young men training to become the future stars of the NFL.

These players are the latest recruits to East Mississippi Community College (EMCC), an undefeated team with 3 National Championship wins over four years under their belt. The EMCC Lions have become a phenomenon in junior college sports, attracting elite athletes, some of whom have been held back by poor academic performance or behavioural issues. Under Coach Buddy Stephens, one of the most successful but least known athletic programs, EMCC graduates more than 20 players per year into football scholarships at four year universities, and nine of his former players currently play in the NFL.

“Following the groundbreaking Mitt, we jumped at the opportunity to work again with director Greg Whiteley,” says Lisa Nishimura, Netflix VP of Original Documentary Programming. “He brings an honest and intimate lens to all his subjects, immediately creating a connection between the viewer and these young, complex subjects. You are invited into their world and feel immediately invested in the high stakes of their lives.”

The members of the team have subjected themselves to the heat and isolation of a town called Scooba – population 712 – and to an imposing coach, whose singular obsession with winning rivals that of legends like Bobby Knight or Mike Ditka. As the Lions strive for their fourth National Championship, the players struggle to keep up the pace in the classroom. Brittany Wagner, a vivacious single-mother and an advisor to the team, whose own success is equally dependent on the academic achievements of the players, does everything she can to keep the guys focused, papers turned in on time, and eligible to play ball.

The series follows the Lions as they enter another season of crushing their opponents, courting recruiters and enduring the physical intensity of this level of football. As their season takes an unexpected turn, the methods of this unconventional team are deeply called into question.

“Considering the school’s recent success, and after meeting some of the people from Scooba, Mississippi, we felt that chances were high that we would be filming one of those special seasons,” adds Whiteley. “What we ended up capturing was something none of us could’ve ever predicted.”

All six episodes will premiere on Netflix globally on Friday 29th July. 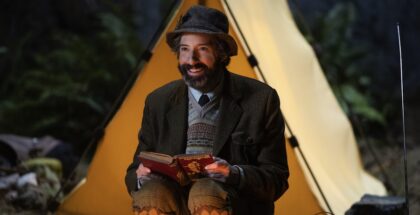