Watch: Netflix drops new trailer for Jupiter's Legacy | VODzilla.co | Where to watch online in UK | How to stream 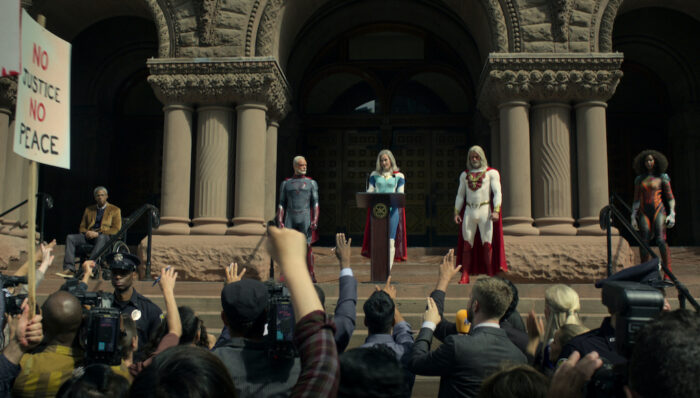 Netflix has dropped a new trailer for Jupiter’s Legacy ahead of the superhero show’s release this May.

The series sees the world’s first generation of superheroes look to their children to continue the legacy, after nearly a century of keeping humankind safe,. But tensions rise as the young superheroes, hungry to prove their worth, struggle to live up to their parents’ legendary public reputations — and exacting personal standards.

Trailer: Jupiter’s Legacy arrives on Netflix this May

Can you live up to the legacy of the world’s first generation of superheroes? That’s the question at the heart of Jupiter’s Legacy, Netflix’s new superhero drama. Based on the graphic novels by Frank Quitely and Mark Millar (Kick-Ass, Kingsman), the epic series spans decades and navigates the complex dynamics of family, power and loyalty.

After nearly a century of keeping mankind safe, the world’s first generation of superheroes must look to their children to continue the legacy. But tensions rise as the young superheroes, hungry to prove their worth, struggle to live up to their parents’ legendary public reputations — and exacting personal standards. Sang Kyu Kim serves as showrunner on the project.

The series stars Josh Duhamel, Leslie Bibb, Ben Daniels, Elena Kampouris, Andrew Horton, Mike Wade, and Matt Lanter. You can see them in action on 7th May, when the eight-episode first season premieres on Netflix. Here’s the first teaser confirming the release date:

Among the first slate of series and movies based on the stories of Mark Millar and based on the graphic novels of the same name by Millar and artist Frank Quitely, Jupiter’s Legacy follows the world’s first generation of superheroes who received their powers in the 1930s. Now, in present day, they are the revered elder guard, but their superpowered children struggle to live up to the legendary feats of their parents.

Steven S. DeKnight (Marvel’s Daredevil) has already been confirmed as showrunner and executive producer of the project, with Millar, Lorenzo di Bonaventura and Dan McDermott, and Quitely serving as executive producers. DeKnight will also write and direct the first episode. Now, the talent in front of the camera is starting to assemble, with Duhamel and Daniels leading the ensemble.

Duhamel is Sheldon Sampson(The Utopian), the storied leader of the superhero team The Union. But times have changed, and he doesn’t understand the world we live in anymore. Or his own family.

Daniels is Walter Sampson (Brain-Wave), Sheldon’s older brother. A man of vast intellect and cunning who, unlike Sheldon, isn’t afraid to get his hands dirty. Or bloody.

Leslie Bibb is Grace Sampson (Lady Liberty), Sheldon’s wife and one of the most powerful heroes on the planet. She doesn’t always agree with Sheldon, but strives to balance his ideals with the reality of the modern, often violent, world they live in.

Andrew Horton is Brandon Sampson, Grace and Sheldon’s son. In training to assume the mantle of The Utopian and become the new leader of The Union, he struggles to live up to his father’s mythic legend.

Mike Wade is Fitz Small (The Flare), the heart and soul of The Union. Despite suffering injuries that ended his career as a superhero, he continues to be one of the most valued members of the team. And is often the only thing holding them together in the face of an increasingly hostile world.

Finally, Matt Lanter is George Hutchence (Skyfox), Sheldon Sampson’s closest friend and ally before turning against him and the rest of his teammates in The Union. Now considered the greatest supervillain in the world, George plots his revenge on the teammates he believes betrayed him.