Trailer: Inside No.9 returns this February for Season 5 | VODzilla.co | Where to watch online in UK

Trailer: Inside No.9 returns this February for Season 5 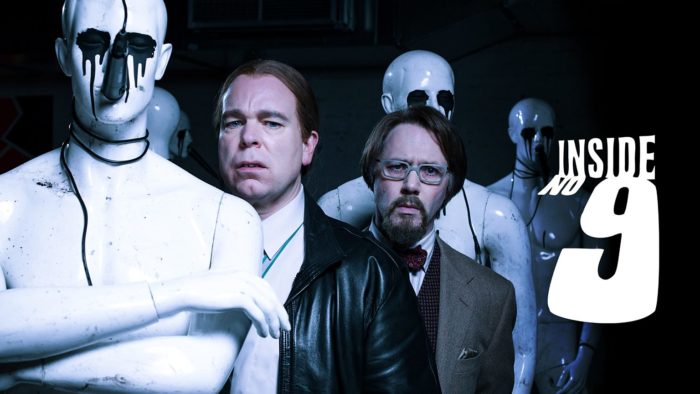 Steve Pemberton and Reece Shearsmith return to BBC Two this month for more exceptionally twisted tales. Yes, Inside No. 9 is back for a fifth season, and a new trailer gives us a glimpse of the small shocks in store.

The award-winning anthology series is a collection of comic tales that blend horror and humour in a variety of styles, formats and settings – all of which have something to do with the number nine. Season 4, which enjoyed the show’s biggest audience to date, ranged from a farce written entirely in iambic pentameter to a murder mystery told in reverse chronological order. The fifth season will stay true to that diverse ambition, with Episode 1 beginning with a tale of promotion, relegation and corruption, as the crunch clash between United and Rovers in the last football match of the season is safely in the care of the four match officials.

Inside No. 9 to return for fifth season

Inside No. 9 will return for a fifth season, the BBC has confirmed.

The award-winning anthology series, created by Reeve Shearsmith and Steve Pemberton, is a collection of fantastically twisted, comic tales that blend horror and humour in a variety of styles, formats and settings – all of which have something to do with the number nine. Ever since its first season, the show’s mini one-act plays have impressed, earning rave reviews at this publication. Over Christmas, all existing episodes were added to BBC iPlayer, helping to contribute to a bumper festive period of record traffic for the site.

The announcement follows a very successful fourth season, which kicked off with the highest launch and consolidated rating the show has seen (1.8m). This year, Inside No. 9 also scooped the Writers’ Guild Award for the Best TV Situation Comedy and was crowned Comedy Of The Year and Best TV Comedy Drama 2017 in the Comedy.co.uk Awards.

Season 4 has ranged from a farce written entirely in iambic pentameter to a murder mystery told in reverse chronological order. The fifth season will stay true to that diverse anthology format, with each episode bringing an original story, a new raft of characters and surprising twists

Inside No. 9 was commissioned by Shane Allen, Controller, BBC Comedy Commissioning and Patrick Holland, Controller, BBC Two. It will be executive produced by Jon Plowman with Adam Tandy as producer. It is a BBC Studios Comedy production.

Steve Pemberton and Reece Shearsmith say: “Having tried and failed to convince the BBC to produce a full Cheese & Crackers series (or at the very least a Summertime Special), we have reluctantly agreed to do another series of Inside No. 9. We will once again attempt to trick, tickle and terrify you – but not necessarily all at once. Unless there’s a twist. Which there won’t be. Or will there? Huge thanks to BBC Comedy and BBC Studios for their continued support, and to our loyal fans for continuing to spread the word.”

Allen adds: “Reece and Steve continue to dazzle, shock and knock audiences for six with their uniquely layered storytelling craftsmanship which attracts the cream of British acting talent. There is not a more distinctive or ambitious comedy show being made anywhere in the world right now as week in week out they create whole new worlds and sets of characters which have instant impact.

The final episode of Inside No. 9 Season 4 will be broadcast on BBC Two on Tuesday 6th‪ February at 10pm‬.

Why Swamp Thing should be your next box set