How Netflix knows what you should watch next | Where to watch online in UK | How to stream legally | When it is available on digital | VODzilla.co

How Netflix knows what you should watch next

When it comes to the modern TV world, the most important superpower anyone can have is knowing what to watch next on Netflix. The streaming giant, though, is one step ahead – and The Defenders is a good example of how Netflix wields that power. One in eight viewers of Netflix’s Marvel series had never watched anything comic book-related before their first heroic binge.

Getting over a genre bias isn’t limited to the Marvel Universe. One in five Stranger Things fans were new to horror before entering the Upside Down. Similarly, one in seven Black Mirror watchers were new to science fiction before exploring the dark side of technology.

How are viewers finding their way to Hell’s Kitchen? It’s not by chance, it’s by design – more than 80 per cent of all shows are discovered through Netflix recommendations. The road to the adventures of Daredevil, Jessica Jones, Luke Cage and Iron Fist, therefore, is paved with a line-up as diverse as The Defenders.

“At Netflix we know genres are just wrappers, which is why we work hard to create algorithms that help members break these pre-conceived notions and make it easier for them to find stories they’ll love, even in seemingly unlikely places,” says Todd Yellin, Vice President of Product.

Netflix analysed viewing behaviour of members who had never watched content tagged “superhero” prior to watching one of its Marvel series to identify the top ten most-watched global titles prior to each series for those new to the genre. The analysis was conducted across more than 40 countries between 2015 and 2017.

Stories that dabble in life’s grey area heighten viewers’ senses for Daredevil, from the political turmoil of House of Cards to the thin lines of family loyalty in Bloodline. Characters who blur the lines between vigilante and villain, such as Walter White’s entrepreneurial antics in Breaking Bad and Dexter Morgan’s homicidal heroics in Dexter, also lead to them Daredevil’s anti-hero and tale of moral ambiguity.

It’s Jessica Jones’ sharp wit that makes her bingeworthy. Series with smart humor, e.g. Master of None, Friends and John Mulaney: The Comeback Kid, draw viewers to Jones, as do stories with strong female leads, such as Orange is the New Black. A nod to her detective roots, series immersed in dark criminal worlds also do the trick, like the psychological thrill of Making A Murderer.

Shows that expose the dark side of society draw viewers to Luke Cage, from the question of guilt in Amanda Knox to the examination of technology in Black Mirror. Similarly, series immersed in dangerous realms, such as a cartel-ridden Medellin in Narcos and a zombie-filled Atlanta in The Walking Dead, lead watchers to Cage’s world.

Grit isn’t the only path to a comic binge. Edgy coming-of-age series, such as Love, Shameless and 13 Reasons Why, bring viewers to Danny Rand and his transitional tale from orphan to crime fighter. The passage from warrior to winner has also struck a chord with viewers courtesy of Ultimate Beastmaster. 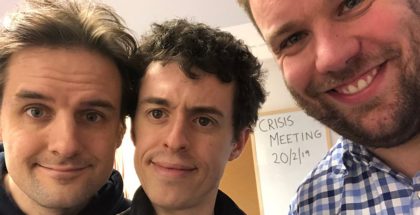