From Taboo to Doctor Who: BBC teases bright new year with 2017 trailer | VODzilla.co | Where to watch online in UK

From Taboo to Doctor Who: BBC teases bright new year with 2017 trailer

2017 is officially here and it can only be better than 2016, right? That will be the case, if the BBC has anything to do with it.

TV had a stonkingly good 12 months last year – you can see our top TV shows of 2016 here – but the Beeb isn’t resting on its laurels, with a calendar stuffed, as ever, with a host of original dramas. To lift the January blues a little, and remind us what there is in store for us in 2017, BBC One has unveiled a nifty little trailer teasing everything on the way to our screens.

There’s something for everyone in there, from Jack Whitehall in Decline and Final and the return of Peter Kay’s Car Share to Line of Duty Season 4 (featuring Thandie Newton, fresh from Westworld), not to mention Apple Tree Yard, Broken, Nazi drama SS-GB, Doctor Foster’s second season, another run of Poldark and the introduction of Peter Capaldi’s new companion, Pearl Mackie (Bill), in a certain TARDIS. And there’s Gary Barlow’s attempt to replace The Voice with Saturday night singing contest Let it Shine.

But perhaps the most intriguing of all is Tom Harry’s gritty new drama, Taboo, which starts on Saturday 7th January at 9.15pm on BBC One. It’s so intriguing that the Beeb has also released a new preview clip of Hardy in action. Read on below the New Year trailer to see that too.

Netflix snaps up UK rights to supernatural series Beyond

Kubo and the Two Strings: The concept art behind the film 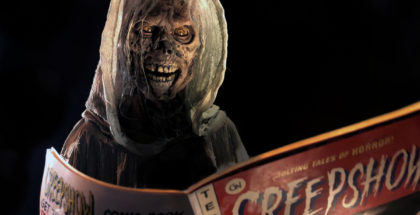