Gateways not gatekeepers: MUBI's "elitist" ad campaign | Where to watch online in UK | How to stream legally | When it is available on digital | VODzilla.co 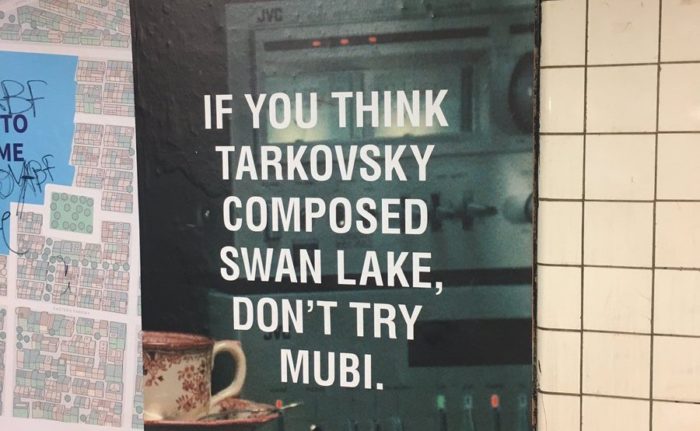 MUBI apologised this week, after causing controversy with a new advertising campaign that was branded “elitist” by film fans.

The disastrous adverts were first spotted on the New York Subway last week by Twitter user Jeva Lange, who posted a picture online with the simple caption “Omg”. That shock then rippled out across Twitter, as subscribers and non-subscribers alike chimed in with their similar disappointment and anger.

The first poster spotted read: “If you think Tarkovsky composed Swan Lake, don’t try MUBI.” That joke, in itself, epitomises the overall problem with the advert: it plays upon the idea that people might confuse director Andrei Tarkovsky with composer Tchaikovsky. Rather than explicitly poke fun at the elitist attitude of someone looking down on such a mistake, though, it concludes with a “don’t try MUBI” message that closes its door upon those people. Even though it was presumably intended ironically, the misjudgement reads like a film company encouraging and supporting the kind of gatekeeping approach that has often separated arthouse cinema from more ‘mainstream’ audiences, and left many people feeling alienated from one of the simplest pleasures in life: discovering new things.

Twitter reactions flew in from both sides of the Atlantic, as some expressed disapproval and others talked of cancelling their subscriptions, or declared they would never sign up up to the service at all – the opposite thing, surely, to what the ads were trying to achieve.

I am a @mubiuk subscriber and this elitist bullshit campaign makes me want to never pay them again. It reads like every misogynist cinema bro I've ever dated.

(Why yes, this thread IS a response to this bullshit elitist Mubi poster. This marketing strategy is a terrible way to expand your audience, and just makes you look pretentious imo.) pic.twitter.com/jcPwuxil4B

MUBI founded Efe Cakarel ultimately took to Twitter to apologise for the adverts, saying that it “wasn’t the intention” of the campaign.

Sorry. Sorry. Sorry.
As we spent a decade bringing some pretty out-there cinema to the world, it appears one or two of our current ads, when seen in isolation, cross a line. We agree. This wasn't the intention of our campaign. At all. Our sincere apologies. – Efe, Founder, @mubi

But the misstep from MUBI’s marketing department, and the backlash it sparked, highlights just how important streaming services are to people accessing movies in the modern age. With video rental stores a thing of the past, subscription services such as MUBI, BFI Player+, FilmDoo and FilmStruck UK should be vital gateways, not gatekeepers, enabling the discovery and sharing of unknown titles, world cinema classics and other hidden gems – services that open up doors to people of any background, taste and expertise. After all, the Internet, despite its many flaws, is a tool for democratisation, one that puts people on a level playing field. The barriers between so-called highbrow and lowbrow culture have therefore never been easier to dismiss; the accessibility and affordability of subscription streaming platforms is the perfect antidote to the exclusionist attitudes that have historically often defined our relationship with culture. You don’t have to know everything (or, indeed, anything) about something to watch it or enjoy it – you just need a connection to the web and a few quid for a month’s subscription.

In the meantime, the recently launched FilmStruck UK responded with its own social media hashtag, #EveryonesWelcomeAtFilmStruck, which prompted a wave of spoof posts deliberately confusing well-known films with other things. (See also: The Shiznit’s alternative ads for MUBI.)

The result is not only a reminder of the value streaming services – with the right, inclusive approach – can bring to online film communities, but also that there is more than one option for movie lovers, whether that’s Netflix, Amazon Prime Video, MUBI, FilmStruck UK or others. Here at VODzilla.co, we welcome all of them, and regularly recommend films from each, either in our weekly MUBI Digests, our #FilmStruckThursday picks, our Amazon Prime Video, NOW and Netflix #FilmoftheDay highlights or our up-to-date lists of hidden gems you might not have seen. And, because we want to hear your voices too, we share your recommendations and reviews every Monday from your weekend viewing.

If you think Tarkovsky composed Swan Lake, we don’t care. But we’d love to join you in watching a film about either. 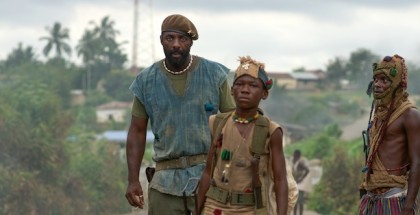