Facebook Watch has launched its first funded news this week, with a range of series from publishing partners available to stream online – albeit only to Facebook users in the USA.

With Facebook under growing pressure for the way that companies such as Cambridge Analytica have been using its advertising service to micro-target specific groups of people with fake information and propaganda – not to mention how that data has been collected – the social network is hoping that producing its own news content will help to shore up its credibility as a media destination. This new content, which is co-produced and part-funded by Facebook, is hosted by award-winning journalists, as well as new faces, and the formats vary from a mix of daily briefings, weekly deep dives, and live breaking news coverage.

At the same time, Facebook is already pushing ahead with more news content, commissioning a second slate of co-funded shows.

“As we continue to improve the Watch experience, we are also rolling out sections for other types of video — like Gaming — to help people reliably catch up with the publishers and creators they care about,” says Campbell Brown, Head of Global News Partnerships & Samir Lakhani, Product Manager, Video.

Here’s the additional line-up of shows that will premiere later this year:

A weekly series that will showcase the bridges being built between people of various races, religions, genders and backgrounds in cities and towns across America. The series is part of “Localish,” a national digital-first media brand that brings out the good in America’s cities, launching on ABC platforms this Fall.

Bloomberg’s At What Cost?

A weekly series that takes the week’s biggest headlines and explains how they will impact you, your finances and your future. Airwaves and newsfeeds can overflow with business news that may seem remote and irrelevant: a central bank decision, trade talks, earnings results. But nothing changes the fortunes of humanity more than economic opportunity. That opportunity is shaped on the business playing field every minute of every day by governments, industries, companies and individuals who engage in the cutthroat competition, destructive innovation, good deeds and bad.

A new, weekly interview show hosted by Audie Cornish of NPR’s All Thing’s Considered. Recorded in front of a live studio audience, the show will feature a different newsmaker each week, giving viewers a chance to hear from the biggest names in politics, tech, business, and entertainment.

McClatchy’s The War Within

The series chronicles the lives of retired veterans of the Iraq and Afghanistan conflicts, who are helping their brothers and sisters in arms cope with the myriad effects of war. Follow America’s next generation of leaders as they forge a path towards healing and positive change for veterans in local communities across the country.

A daily news show which centers on breaking news and topical stories for young audiences. The show aims to spark conversations on the core issues that matter most to young adults today.

A weekly series that will travel across the country and bring two people divided on an issue together to collaborate on a community service project, such as cleaning up a park or volunteering at a food bank. Each shares their perspective, as audiences watch to see what happens.

As Facebook continues to invest an increasing amount in its video production and distribution, expect Facebook Watch to be available in the UK in the near future.

Facebook is getting in on the news game with the announcement of its first funded news shows for Facebook Watch.

The social network’s growing push into video has resulted in the dedicated Watch part of the platform, which houses both video recommendations based on what other users have been watching and original content that is co-produced by Facebook, with branded partners sharing in the ad revenues generated. Earlier this year, Facebook Watch won its first Daytime Emmy nominations for the cooking and travel show Mind of a Chef.

With Facebook under growing pressure for the way that companies such as Cambridge Analytica have been using its advertising service to micro-target specific groups of people with fake information and propaganda – not to mention how that data has been collected – the social network is hoping that producing its own news content will help to shore up its credibility as a media destination.

“We’ve seen that people enjoy coming to Watch to find timely, relevant content and to catch up with the publishers and creators they care about,” said Campbell Brown, Head of Global News Partnerships, in a blog post. “We think that this is a great opportunity to test a viewing destination for high quality news content within Watch and are excited about the possibilities here with the broader ecosystem of news publishers.”

“Earlier this year we made a commitment to show news that is trustworthy, informative, and local on Facebook,” he added. “As a part of that commitment, we are creating a dedicated section within Watch for news shows produced exclusively for Facebook by news publishers.”

With an aim to produce “high quality and timely news content”, Facebook is teaming up with a range of publishers, from traditional broadcast to digital native, both national and local. The shows will be hosted by award-winning journalists, as well as new faces, and the formats will vary from a mix of daily briefings, weekly deep dives, and live breaking news coverage.

Publishers “will have full editorial control of their shows”, notes Facebook.

The slate of news content will launch later this summer. Here’s the line-up:

A daily news show with ABC News journalists from around the globe delivering on-the-ground reporting and the top headlines that are driving the day.

In Alabama Media Group’s Chasing Corruption’s weekly series, host Ian Hoppe and the Reckon by AL.com team travel across the USA to meet some of America’s toughest watchdog journalists — and the stories of conspiracy, bribery, fraud and more they’ve uncovered.

A weekly explainer show that breaks down the biggest issue of the week. In 3-5 minute episodes hosted by a rotating cast of social influencers, Undivided ATTN: will provide context on the stories everybody’s talking about.

A daily global brief on the world, M-F evenings featuring Anderson Cooper and a roster of guests. The interactive program will air live from Anderson’s New York City newsroom in mobile-friendly vertical video.

This will focus on up-to-the minute breaking news and the most compelling stories of the day. FNC’s chief news anchor Shepard Smith will report the latest news each weekday afternoon, with Carley Shimkus updating viewers every morning. Additionally, Abby Huntsman will provide the latest headlines once each morning throughout the weekend.

Revealing the world as we see it: complicated, diverse and full of potential. Mic correspondents on this new, twice-weekly show go beyond the headlines to profile the underrepresented, the problem-solvers and the provocateurs.”

Award-winning journalist, anchor and author Jorge Ramos travels the country to talk to immigrants of diverse backgrounds and situations, delivering a rarely covered view of today’s America from their perspective. Univision will also cover the top stories in Spanish ‪at noon‬ every day on Watch with “Noticiero Univision Edición Digital.” 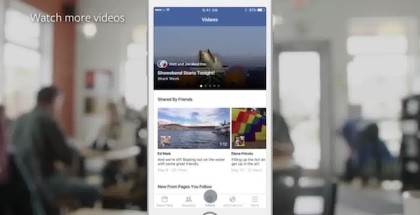