Host heads to BFI for online Q&A | VODzilla.co | Where to watch online in UK 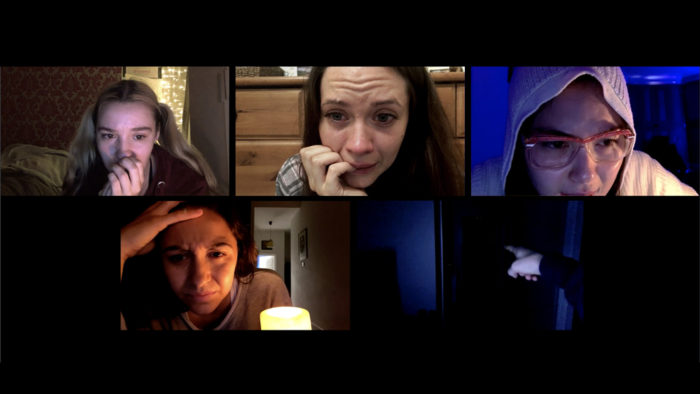 Host is heading to the BFI in more ways than one.

The film, which debuted on Shudder last month, follows a group of six friends who hire a medium to conduct a séance over Zoom during lockdown. When things go wrong, they get far more than they bargained for, and start to fear that they might not make it through the night.

The result has been a breakout hit for director Rob Savage (Salt, Dawn of the Deaf), who co-wrote the movie with Gemma Hurley and regular collaborator (and fellow exec-producer) Jed Shepherd.

“This scarily innovative Zoom chiller is an early contender for the horror movie of the year,” we wrote in our review, hailing Host as the “definitive lockdown horror”.

The film, which was shot remotely under quarantine, will be shown on the big screen at BFI Southbank in September and October. Until then, Savage, Shepherd and Hurley will take part in an online Q&A for the BFI, along with producer Douglas Cox, stars Haley Bishop and Caroline Ward and editor Brenna Rangott.

The Q&A takes place on the BFI’s YouTube channel at 7pm:

Director Eva Riley will be heading to the BFI this Sunday for a Q&A discussing her new movie Perfect 10.

Riley’s feature debut is a coming-of-age drama in which an aspiring teen gymnast’s world is turned upside down by the arrival of the half-brother she never knew she had. Starring newcomer Frankie Box, a real life gymnast, it follows 14-year-old Leigh as she discovers that she has a step-brother she knew nothing about.

“This is a moving coming-of-age story that quivers with potential and promise,” we wrote in our review of the film, which is currently available to stream on BFI Player and Curzon Home Cinema. “Expect to hear more from all three of these talents in the future.”

You can hear more from Riley at 7pm on Sunday 9th August here:

Intrigued by the story of a Japanese company that, for a fee, can supply people to imitate absent family members, Werner Herzog flew to Tokyo and filmed this scripted series of moments in the life of Family Romance, LLC. In an uncanny bit of re-re-enactment, the company’s founder Yuichi Ishii plays himself, as the man who performs multiple impersonations a day to fulfil people’s wishes. Amusing and disturbing in equal measure, Herzog’s film questions the bizarre nature of the social systems that we put in place to deal with our random existence and probes our blurry relationships to truth and love.

“Ending on a contemplative, powerful note, Family Romance, LLC produces enough engaging material to satisfy viewers looking for a taste of the weird,” we wrote in our review of the film.

With the film available to rent on multiple online platforms, Herzog will join Kapadia to talk not only about the movie, but also guerrilla filmmaking, creative processes and their favourite footballers.

The Q&A kicks off at 7pm and will be available on-demand afterwards:

Lynn + Lucy is the latest film to get the online Q&A treatment, with the BFI hosting a special interview with director Fyzal Boulifa on Friday 10th July.

Lynn (Roxanne Scrimshaw) and Lucy (Nichola Burley) have been friends their whole lives; inseparable at school and now living as neighbours and young mothers on an estate. But when a tragedy befalls the pair, a chain of events is set in motion that will severely test their bond, bringing out fears and resentments in the local community.

“Nichola Burley and Roxanne Scrimshaw are fantastic in this intensely moving tale of friendship and suspicion,” we wrote in our review.

Hosted by Nia Childs, the Q&A will talk about the film and class, with Boulifa joined by stars Roxanne Scrimshaw and Nichola Burley. The Q&A will take place at 7pm on the BFI YouTube channel.

The film is currently available exclusively on BFI Player, as part of a £4.99 monthly subscription.

The Uncertain Kingdom is the latest film to get the BFI at Home treatment, with a live online Q&A discussing the anthology of timely short films.

The anthology is available on BFI Player programmed in two feature-length volumes, and is also available on iTunes, Google Play, Amazon Prime Video and Curzon Home Cinema. You can see the full breakdown of the anthology here.

Little Joe is the latest film to join the BFI’s line-up of online Q&As.

Part of the ongoing BFI at Home programme – which includes Mark Kermode’s regular MK3D event – it will see the sci-fi horror’s director Jessica Hausner joined by director The Falling helmer Carol Morley for an in-depth conversation. It follows a similar conversation between The Lighthouse director Robert Eggers and director of Bait Mark Jenkin, which streamed last week.

The conversation streams live at 7pm on Thursday 18th June on the BFI YouTube channel and will be available on-demand aftewards.

The Lighthouse and Bait meet in BFI online Q&A

To celebrate the digital release of The Lighthouse, director Robert Eggers will be joined by director of Bait Mark Jenkin for a BFI online Q&A.

The conversation, which is part of the ongoing BFI at Home programme, streams online on Thursday 11th June. It will see the pair discuss their shared influences, comparative working practises and creating magic with black and white celluloid.

The video goes live at 7pm and will be available on-demand afterwards.

The BFI is hosting a special online Q&A with Asif Kapadia in memory of the late Irrfan Khan.

The event, which is part of the ongoing BFI at Home programme, will see Kapadia joined by cinematographer Roman Osin as they reflect on the director’s debut feature, which starred Khan and proved pivotal in the actor’s career.

In The Warrior, which won the Sutherland Award at the BFI London Film Festival in 2001, Irrfan Khan plays Lafcadia, the leader of a group of warriors hired by a local lord to enforce his rule among the people. When he is ordered to punish a village that has failed to pay tribute, Lafcadia, torn between the path of peace and the path of war, renounces his violent ways and sets off on a journey to the mountain village in which he was born. The lord then dispatches Lafcadia’s second-in-command, to track-down the former warrior. As well as THE WARRIOR, Khan’s varied career saw him star in films such as Piku, Slumdog Millionaire and The Lunchbox.

Kapadia will be interviewed by BFI Head of Programme and Acquisitions Stuart Brown. The Q&A will be live-streamed on YouTube for free at 7pm UK time on Friday 15th May. Khan and Kapadia previously appeared at the BFI Southbank together in 2013 for an interview, which is also available to watch on YouTube.

The Warrior is available to watch online on Amazon Prime Video as part of a Prime membership or a £5.99 monthly subscription.

Where can I buy or rent The Warrior online in the UK?