BBC Music unveils 2021 Glastonbury weekend line-up | Where to watch online in UK | How to stream legally | When it is available on digital | VODzilla.co

While Glastonbury isn’t taking place again this year, due to the coronavirus pandemic, the BBC is one again pulling its virtual wellies on and bringing a taste of Worthy Farm to living rooms.

The Glastonbury Experience will run from Friday 25th to Sunday 27th June, spanning BBC television, BBC iPlayer, BBC radio and BBC Sounds. It will include, once again, a BBC iPlayer Glastonbury pop-up channel, streaming a mix of classic sets, documentaries and specially curated programmes from Radio 2’s Jo Whiley, Radio 1’s Clara Amfo and 6 Music’s Lauren Laverne. Each day of programming will focus on a different theme at Glastonbury – the 1990s (Friday), the 21st century (Saturday) and Legends (Sunday)

More than 50 full Glastonbury sets from the BBC archives will be available to watch on BBC iPlayer and more than 30 sets available to listen to on BBC Sounds from Monday 21st June.

The cornerstone of the weekend, though, will kick things off on Thursday 24th June, with an exclusive BBC iPlayer stream of individual performances from Live at Worthy Farm – the online concert that premiered on 22nd May. The concert featured Wolf Alice, Michael Kiwanuka, George Ezra, IDLES, HAIM, Coldplay, Damon Albarn, Jorja Smith, The Smile, Kano and Honey Dijon featuring Róisín Murphy.

An exclusive 60-minute BBC Two documentary – Live At Worthy Farm: Backstage presented by Jo Whiley – will tell the story of how the event was put together. BBC Two will also broadcast Live At Worthy Farm: Highlights, featuring a selection of performances from the artists who took part in the event.

Classic Glastonbury performances from artists including Radiohead (1997), Kylie (2019) and Fela Kuti (1984) – the latter of which has never been shown on TV in its entirety before – will also be broadcast on BBC Two and BBC Four across the weekend and available on BBC iPlayer.

Each of these sets are available on BBC iPlayer until 23rd July. Click here to stream.

Coldplay
A performance in front of the Pyramid Stage.
33 mins

HAIM
Sundown set from LA sisters who flew in for the concert.
31 mins

Kano
A career-defining Live at Worthy Farm set from the Grime pioneer.
35 mins

The pop-up channel will stream across Friday 25th, Saturday 26th and Sunday 27th June from 10am to late and each day will take on a different Glastonbury theme. Friday’s programmes will explore the 90s at Glastonbury, Saturday’s shows will move forward into the 21st century and Sunday will celebrate the Glastonbury Legends.

Friday’s programmes will explore some of the genres that came to the fore during the 1990s, including Britpop and dance music, as electronic pioneers brought rave to Pilton. On Saturday, programmes turn their attention to when global stars took the festival by storm in the 21st Century and pop music came to Worthy Farm. Sunday’s programmes will be dedicated to the legends who have performed over the years as well as looking at the early performances from artists who would go on to headline one of the bigger stages at the festival.

Each morning, the channel will kick off with programmes curated by presenters Jo Whiley (Friday), Clara Amfo (Saturday) and Lauren Laverne (Sunday). Jo, Clara and Lauren will share some of their favourite memories, interviews and performances from Glastonburys past with viewers, who will then be treated to two of each presenter’s all-time favourite Glastonbury sets.

Each afternoon, across the three days, there will be surprise sets, revealed on the day and streamed in full on the BBC iPlayer channel.

BBC iPlayer will also be making over 50 classic sets available to relive in full from Monday 21st June. This is in addition to individual Live At Worthy Farm performances from the likes of Wolf Alice, Michael Kiwanuka, George Ezra, IDLES, HAIM, Coldplay and Damon Albarn, which will be available to stream from Thursday 24th June.

On the evenings of Friday 25th, Saturday 26th and Sunday 27th June, the BBC iPlayer pop-up channel and BBC Two will simulcast even more programmes, in keeping with each day’s theme.

On Friday 25th June, BBC Two will revisit key moments from the 1990s at Glastonbury, including the arrival of Britpop and TV cameras at the festival and when Robbie Williams played the Pyramid Stage in 1998 in Glastonbury in the 90s. Following this will be Radiohead at Glastonbury 1997 – the set which the band performed two weeks after the release of their seminal album OK Computer. The performance features Radiohead tracks including Paranoid Android, Karma Police, No Surprises and The Bends.

The following day (Saturday 26th June), BBC Two will explore the stories, stars and memorable moments since the year 2000 in Glastonbury in the 21st Century, before showing Kylie at Glastonbury 2019.

On the Sunday (27th June), BBC Two will show Glastonbury Legends at 7.30pm – performance highlights from some of the many musical legends who have performed at festival over the years.

At 9pm is Live At Worthy Farm: Backstage. Presented by Jo Whiley, this exclusive, behind-the-scenes documentary follows director, Paul Dugdale and the team as they put together the spectacular filmed music event, Live At Worthy Farm. Featuring interviews with Emily Eavis, the artists who performed including Damon Albarn, Kano, Roisin Murphy, Wolf Alice and Coldplay and with unrestricted access to rehearsals and production. The programme tells the story of how Glastonbury’s very first festival without an audience was staged.

At 10pm, Live At Worthy Farm: Highlights will showcase a selection of the incredible performances from the artists who took part in the event.

All BBC Two and BBC Four programmes will be available to watch on BBC iPlayer.

DocFest 2021 review: Songs for the River 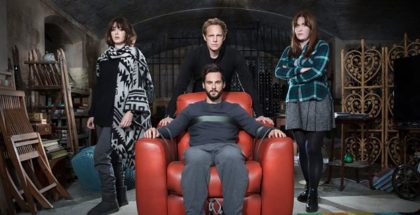