Apple renews The Morning Show for Season 3 | Where to watch online in UK | How to stream legally | When it is available on digital | VODzilla.co 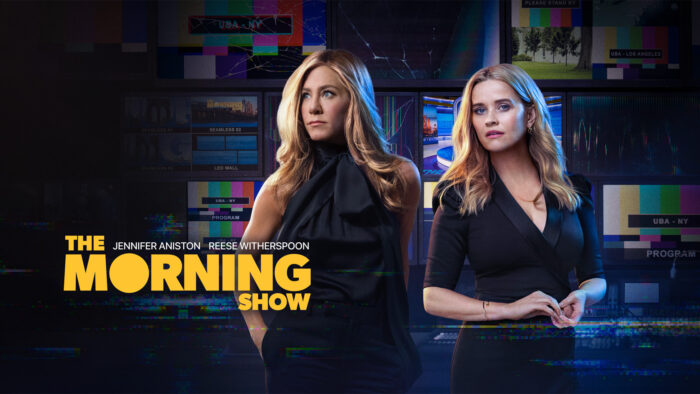 Apple TV+ has renewed The Morning Show for a third season.

Starring and executive produced by Jennifer Aniston and Reese Witherspoon, the drama explores the world of morning news and the ego, ambition and the misguided search for power behind the people who help America wake up in the morning. Season 1 followed the free fall of an early morning newscast in the wake of a harassment scandal involving veteran host Mitch (Steve Carell), leading co-host Alex (Aniston) and new presenter Bradley (Witherspoon) to navigate their way through the mess.

Season 2 picked up as the Morning Show team emerge from the wreckage of Alex (Aniston) and Bradley’s (Witherspoon) actions to a new UBA and a world in flux, where identity is everything and the chasm between who we present as and who we really are comes into play. Along with Aniston and Witherspoon, the star-studded returning cast included Steve Carell, Billy Crudup, Mark Duplass, Nestor Carbonell, Karen Pittman, Bel Powley, Desean Terry, Janina Gavankar, Tom Irwin and Marcia Gay Harden.

Joining the cast for Season 2 were Greta Lee as Stella Bak, a tech world wunderkind who has joined the UBA executive team; Ruairi O’Connor as Ty Fitzgerald, a smart and charismatic YouTube star; Hasan Minhaj as Eric Nomani, a new member of the Morning Show team; Emmy Award-winner Holland Taylor as Cybil Richards, the savvy chairwoman of the UBA board; Tara Karsian as Gayle Berman, a news producer; Valeria Golino as Paola Lambruschini, a documentary filmmaker; Julianna Margulies as Laura Peterson, a UBA news anchor; and Will Arnett as Doug Klassen, Alex’s agent.

“A thrillingly timely and complex study of complicity and compromise,” we wrote in our review of Season 2, hailing it as “one of the 2021’s boldest TV shows”.

Charlotte Stoudt (Fosse/Verdon, Homeland, House of Cards) will be showrunner for Season 3, and also exec-produce. Kerry Ehrin, who developed The Morning Show and served as showrunner on the first and second seasons, will serve as consultant.

“It has been thrilling to watch The Morning Show go from strength to strength over the past two seasons, exploring topical storylines that have resonated with audiences around the world while also being incredibly addictive and entertaining,” said Matt Cherniss, head of programming for Apple TV+. “We’re excited to see where Charlotte takes these extraordinary characters in Season 3 and to watch the magic that Jennifer, Reese and our awe-inspiring cast continue to bring to the captivating world of morning television.”

“Kerry, Mimi and Michael, and the teams at Media Res, Hello Sunshine and Echo Films, have created an irresistible world that is equally delicious and provocative,” added Stoudt.