Every Friday, Mark Kermode highlights one of the collection’s titles with a video introduction. This week, it’s Night Moves. Jesse Eisenberg and Dakota Fanning star in Kelly Reichardt’s taut political thriller about radical environmentalists planning to commit an act of eco-terrorism.

“Events unfold slowly under Reichardt’s watchful eye. The film may be called Night Moves, but she’s happy for things to stay stationary. That’s both the film’s greatest strength and biggest weakness,” we wrote in our review. “In the run-up to the bombing, the methodical assembling of details provides a riveting drip-feed of tension… Then, just as the gradual pace pays off, everything comes to a halt. The second half of Night Moves stands still, watching as our young activists suffer a major attack of guilt.”

Go back 70 years to Ishiro Honda’s original Gojira flick and the monster wasn’t just a monster. He was a walking nightmare – with feet the size of a truck. Flattening buildings less than a decade after the atomic bomb did the same, he was a radioactive reminder of the trauma and destruction. The result is an exciting blockbuster, an alarming pacifist warning and a jaw-dropping piece of catharsis.

It Always Rains on Sunday

The Spy in Black

Michael Powell and Emeric Pressburger teamed up for the very first time with this 1939 thriller, following a U-Boat captain who arrives in The Orkney Islands to meet a spy. The Archers’ legendary duo would go on to make many more cinematic crackers.

The words “poetic tribute to the city of Belfast” may not appeal to everyone, but there’s certainly poetry to be found in Mark Cousins’ gentle city symphony.

The director’s latest cinematic essay chronicles the changing landscape of the Irish town. Cousins’ narration is out in full force, his mellifluous brogue providing an easy-listening counterpart to visuals that are equally easy on the eye. He mostly hands voice-over duties, though, to Helena Bereen, who voices an old woman who has lived in the city for generations – and, in turn, voices the place itself. Read our full review

Prick Up Your Ears

Stephen Frears’ celebration of British playwright Joe Orton stars Gary Oldman and Alfred Molina. Written by Alan Bennett, the tragicomedy is a tale of prison, sexual politics and a potential dalliance with The Beatles, not to mention a surprising list of cameos, which includes Derek Jarman, Wallace Shawn and Julie Walters.

Immigration is all over the media headlines today, but how much have attitudes really changed since the 1970s? Get a window into familiar concerns about immigrants with Ben Lewin’s Welcome to Britain, which focuses on new arrivals at Heathrow airport.

Funny, acerbic and moving story of a young man’s sexual awakening as family life crumbles around him.

All in Good Time

A pair of newlyweds endure a honeymoon staying with the groom’s parents in a comedy from East Is East writer Ayub Khan-Din.

A Portrait of Eden

A week in the life of 22-year-old Eden Kötting, who has Joubert’s Syndrome. A moving, tender film by Gideon Koppel (Sleep Furiously). 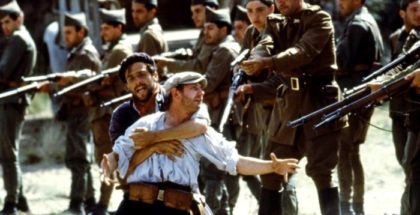