UK TV review: Mad Men Season 7 Episode 7 | Where to watch online in UK | How to stream legally | When it is available on digital | VODzilla.co

Guidance is internal. Three. Two. One.

In the mid-season finale of Mad Men, three Americans are on their way to be the first men on the moon. People crowd around their television set for a worldwide event unlike any other. Everyone is excited, everyone is scared and no one knows if they’ll survive.

Everyone’s behaving strangely – a brilliant writer’s gambit to ensure that as the lines between characters and storylines, man and space blur, we can focus in on what’s important. Stan wonders if the moon is made of quicksand while Don fends off advances from a caring, but dim, Meredith.

Matthew Weiner & Partners ensure that nothing, not even space travel, distracts Don and Peggy from their pitch to Burger Chef. As with every pitch, it’s fantastically written and performed with a soft, but firm confidence. This is as much to do with Hamm and Moss’ incomparable chemistry as their understanding of the material, but it’s also down to Matthew Weiner himself (writer and director of the episode), who has consistently crafted bigger, better pitches depending on what is required.

Distracting Roger Sterling is, as always, a much simpler matter. He and Cutler struggle with votes attempting to rid the company of Don while both try to force their vision of the future onto SC&P.
Harry Hamlin’s Cutler plays the bad guy this episode, even cutting Lou Avery’s ego down to size. Hamlin has had one of the less well-defined roles in the show; although he is often a voice in meetings, as a character, he has always been mysterious, a little odd and only really willing to connect with Ted Chaough. Hamlin has handled this with a sincerity that ensures Cutler’s mystery remains threatening even in times of comedy.

The arc that all fans will be talking about, though, is the evolution of Sally Draper, refined by that of Kiernan Skipka. When placed in a house with an often topless young man, with sports scholarships arriving for him every day, Sally appears to conduct herself exactly as her mother would. But, brilliantly, Sally is not Betty (although Kiernan Shipka has perfected smoking like her in one smile-inducing moment of nostalgia).

As Don and Peggy line up to pitch alongside Pete Campbell, the partners squabble about what is to come and man lands on the moon. The writer’s room takes a moment to bring tears to the eyes of all viewers by quietly removing another major character and reminding us that, after a mid-season break, we are headed for the end. Although losing such a figure within the Mad Men world is distressing, never before has the death of a character – in any show – been treated with so much dignity and respect. 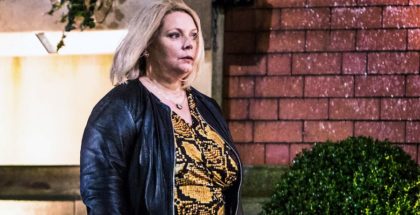