Guess who’s back. Back again. Brody’s back… but you’d be forgiven for not telling a friend – because after a dreadful opening, Homeland has re-established itself as a heart-stopping spy thriller with Saul at the heart of operations. The prospect of Damien Lewis’ conflicted marine returning, then, seemed like the only thing that could derail the show once more.

Luckily, Episode 10 of Season 3 proves that’s not the case.

Yes, Brody’s back. And he hasn’t ballsed it all up.

After popping out to Caracas for the afternoon, everyone’s favourite beard has flown back with Brody in tow. The problem? He’s drugged out of his brains. And The Beard wants him functioning again – in three weeks.

The Beard knows he’ll need help to pull this one off, so he rallies everything at his disposal. Dar Adal, ever the twitchy sidekick, recommends some illegal drugs – just the thing to convince anti-CIA Senator Lockhart that the agency isn’t a total mess. The key pawn, though, is Carrie. And Mandy Patinkin’s increasingly shadowy performance makes it clear that this is how Saul (at least on some level) thinks of things.

“I have a plan…” The Beard tells Claire Dane’s agent with all the hushed authority Professor Dumbledore reserves to tell Ron Weasley ginger-haired wizards are to be taken out and shot. You can feel the excitement fizzing out of his chin. As far as plans go, it’s pretty bold stuff: send Brody back to Iran as a defector to the West, then have him bump some people off to make way at the top for The Beard’s new plaything, Javadi.

That way, The Beard insists, there can finally be peace – by the US murdering, lying and cheating their way to the top. It’s flawed logic to say the least, but what Homeland lacks in intelligence, it makes up for with… well, intelligence.

That’s right. Homeland is back at its clever old best. For proof, just look at Dana. Morgan Saylor’s troubled teen remains the most fascinating character in the show, but has been stuck with second-rate Dawson’s Creek nonsense for the whole season. This week, though, her confrontation with her disowned dad crackles with real emotion and intensity. And it takes place within a rounded 60 minutes without distracting from everything else. Finally, Homeland has solved the Dana dilemma.

Other reunions are equally understated, conducted in impressive silence rather than tedious shouting matches or melodramatic showdowns – Damian Lewis reminds us how intense his presence can be, while Claire Danes juggles trust issues with a minimal amount of cry face.

And so back to The Beard’s plan. That’s what Homeland has turned into: Mandy Patinkin running plays like an extremely hairy baseball coach. A baseball coach with a gun. By keeping him at the centre of the show – a hub of moral conundrums, deceit and impeccable grooming – Homeland is just right. And not even the return of Brody can knock it off balance.

There are still lapses in judgement, though. The idea to take Brody fishing to get him back into shape is laughably silly. And just when you think Homeland can’t get any more ridiculous, Saul unleashes his secret weapon: a training montage. Yes, really. 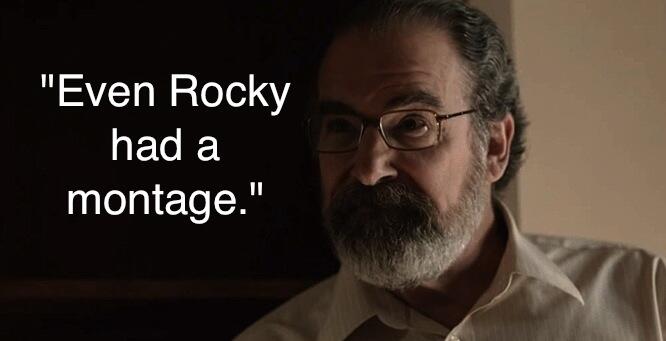 Oh, Homeland. Your ability to be amazingly clever and unspeakably dumb – frequently at the same time – never ceases to amaze. But we both know what you are. We both know what you’ve done. And if you keep going like this, we don’t want you to change.

New Man of Steel behind the scenes featurette: The Creation and Destruction of Krypton