Welcome back, Brody. All is forgiven. Well, you know, except for the terrorism and stuff.

That was the point we had reached with Homeland, a show that used to be about national security but these days seems to be about the love life of a teenage girl called Dana. It was ok, we told ourselves, rocking back and forth like Carrie Mathison without tiramisu. Brody would be back soon. He would make everything better.

With Episode 3 of Season 3, though, you wonder if it would’ve been better if Brody didn’t return after all.

Brody (Damian Lewis), it turns out, is in Venezuela after crossing the Columbian border and getting shot along the way. He wakes up in The Tower of David, Caracas, a half-finished 45-storey skyscraper that has been overrun by squatters. It’s a desolate, striking landmark that actually exists and an ideal location for Homeland; it’s interesting, it’s realistic and, most important of all, Dana isn’t there.

Brody spends his time in the Tower mooching about in a hoodie and trying to work out what “El Nino” wants with him. Chucking blokes off buildings and shooting others, Manny Perez gives good menace as the mysterious crime lord. He seems to know who Carrie is, but does he want the $10 million reward for Brody’s head? Is that why he’s protecting him?

Return of main character. Check. Enigmatic bad guy. Check. Cracking location. Check. This is the point where Homeland should be blazing its way back to former glories – but instead it just feels, well, dull. A corny doctor, who spouts proverbial wisdom in between injecting Brody with heroin, doesn’t do much to inspire intrigue. The only hope for excitement is that Brody’s decision to shave his head might lead to him moving to Albuquerque to set up a meth lab next week.

And so it’s actually a relief when we switch back to Carrie and her crazy facial expressions.

Claire Danes remains excellent as the unhinged agent, but her storyline seems to be going nowhere either. After the promising first episode of Season 3, which presented Carrie’s mental condition as one strand of a CIA thriller, her manic depression seems to have become the plot itself.

Heavy-handed direction from Clark Johnson – the guy who brought us the nail-biting penultimate episode of Season 1 – finally stamps out any enthusiasm, cutting between Carrie and Brody’s drug-addled isolation to ram home the parallel between the two.

Homeland was never a subtle show, but there was a time when you were too busy not breathing to notice. These days, you’re too busy sighing to care.

Come back, Dana. All is forgiven.

iTunes review: Doctor Who – The Enemy Of The World

VOD film review: Behind the Candelabra 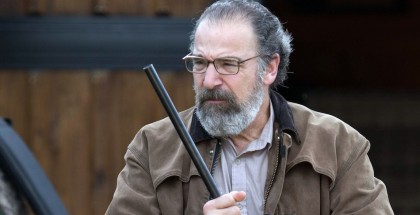 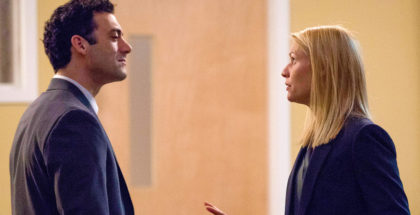