VOD TV review: Broadchurch Season 2, Episode 4 (spoiler-free) | Where to watch online in UK | How to stream legally | When it is available on digital | VODzilla.co

Warning: If you haven’t seen Season 1, this will contain spoilers.

“Abby, these are people’s lives we’re talking about!” scalds Sharon (Marianne Jean-Baptiste), as the defence team for Joe Miller stroll the coastline and discuss who to pin Danny’s upon. “Have some sensitivity.”

It’s a warning that Broadchurch could do with heeding itself, as Episode 4 continues the seaside town’s gradual relocation from Dorset to Albert Square.

The cast do what they can with Chris Chibnall’s ever-ripening script, but things still seem resigned to topple just over the cliff edge into silliness. After last week’s accusation of Hardy and Miller having an affair, we get to see them in very intimate close quarters – an amusing treat, as they rub off against each other worse than they normally do. It’s the kind of tiny character moment that David Tennant and Olivia Colman can squeeze oodles from and the kind that once defined the ITV drama’s uniquely personal approach.

“Did you shag him? Oh harder, Hardy!” jokes Miller’s sister, while Mark and Beth share a sweet moment with the newest member of the Latimer family, only for Beth to be asked whether she would consider supporting a charity to help sex offenders. Jodie Whittaker’s facial reactions during both conversations are subtle but spot-on; a reminder of just how good the emotional side of this series can be, when the characters aren’t being made to shout nonsense at each other.

Season 2 of Broadchuch takes some big steps in the right direction, as we finally get to delve into the details of the Sandbrook case. We are introduced to Ricky, the father of Pippa (the girl who was killed, while cousin Lisa went missing), and also Alec’s wife and daughter. Tennant’s teary-eyed determination to solve the case is even given good justification, but just as we settle into the sofa for some juicy twists, along comes a cheesy dinner scene featuring his family.

It’s that slightly jarring jump between moments that stops this sequel from engaging like the first, gripping mystery; the show has a tendency to add one interesting detail, then rush past it to pile on another for good measure. Notions of affairs are raised, not just in Danny’s case but with people in Pippa’s case too, which get your brain ticking, only for some actual sex scenes to ruin the mood with some bizarrely over-the-top dialogue.

(“You better be telling the truth,” one partner warns, post-intercourse, the kind of words we all dream of hearing while lying on a pillow.)

The same problem arises with the very welcome return of Pauline Quirke’s sullen Susan. She promptly announces that she is ill within seconds of re-appearing, leaving no time to let it settle, then it’s straight back to the courtroom for more melodrama.

If you can tolerate Broadchurch’s love of cheesy courtroom antics, even your patience will be tested by Episode 4. Charlotte Rampling’s stern presence remains a pleasure, but she is given clunky sports metaphors to deliver, not to mention her ongoing eyesight issues to contend with. A little is a lot in Broadchurch. To add a lot on top of a lot is just unnecessary.

So by the time we get to our star witnesses delivering the supposed cliffhangers of the week, Broadchurch is already struggling to keep us immersed. The fact that the statements made on the stand involve facts we already know lessens the blow, rather than heightens it; instead of being thrilled by contradications and hidden motivations, we merely puzzle over why people are saying such odd things or, in the case of Miller, apparently walking away from family crisis to investigate complete strangers without a second thought. Season 1 was summed up by the nuanced, quiet face of Olivia Colman’s Ellie. Season 2 feels closer to the brash, not-thinking-ahead cries of her sister.

These are people’s lives, Broadchurch. Have some sensitivity.

Season 1 and 2 of Broadchurch are available on-demand with ITV Encore, ITV’s premium subscription channel. ITV Encore is available through Sky on demand and Sky Go. Don’t have Sky? You can also stream ITV Encore’s catalogue through NOW, which costs £6.99 a month, no contract. 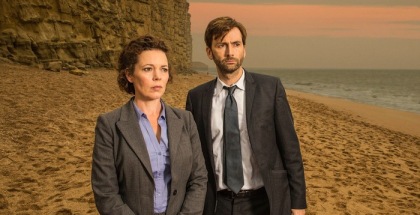