Netflix UK film review: Under The Shadow | VODzilla.co | Where to watch online in UK | How to stream

Under The Shadow might sound like the most generic title imaginable for a horror film, but it’s an unusually apt one for Babak Anvari’s sensational debut. Seemingly out of nowhere, the movie has emerged as an instant classic. It’s a Farsi-language drama capable of standing tall against the best of modern Iranian cinema, but – like the recent A Girl Walks Home Alone At Night – it evades that nation’s cultural censorship because the director is based in the West. It joins an ever-growing list of art horror masterpieces by balancing its frights with fertile thematic depth, touching on grief, PTSD, societal repression and maternal fears.

Anvari’s film details the life of Tehran woman Shideh (Rashidi) and her strained relationship with daughter Dorsa (Manshadi) against the backdrop of the 1980-88 Iran-Iraq war. It’s bad enough that they live under the constant threat of death, but then weird visitations hint that they’re always being haunted by a djinn, the ancient demon of Iranian folklore.

The plot echoes the best horrors of recent times. With its juxtaposition of fairytale and real-life warfare, it resembles Pan’s Labyrinth; the focus on a troubled mother and her offspring recalls The Babadook; and there’s a touch of Donnie Darko in the 1980s setting and an unwelcome arrival through the roof. But the film feels like its own beast, because of the density of ideas that the Iranian setting gives it.

This is the same middle-class milieu familiar from the films of Asghar Farhadi, where the characters’ secrets and regrets lurk beneath a veil of polite conformity – but here wrenched further out of shape by the war. The fears are stacked like Russian dolls. What will get her first? Iraqi missiles falling from the sky, the authorities come to take her contraband Jane Fonda workout video, or the djinn, gradually ramping up the psychological and physical torment?

The gradual shift into outright horror is done with remarkable fluency; it’d be fun to drop this into an art-house film festival and see jaws drop as the menacing rumbles of sound and prowling camerawork start to work their disquieting black magic. But for all its technical prowess – including surely the jump scare of the year – it’s the brooding melancholy of the metaphor that gets you.

Shideh is damaged in so many ways, and the film adopts tape as an image system – every desperate attempt to keep her home in one piece echoes the weary patchwork of the broken society outside. But then, for good measure, the Anvari extends the ‘wraparound’ symbolism to Shideh’s chador… and the perils of a woman exposing herself (emotionally, as well as physically) in a conservative society. Right at the point where the film is flying into pure genre cinema, Anvari drops us back to reality with a scene of everyday injustice that, with our nerves already in shreds, feels absolutely devastating.

Rashidi, particularly, deserves to be a star on this evidence: a very modern scream queen, battling personal and political demons with just enough stubbornness and strength to overcome her obvious psychological fragility.

And that’s the masterstroke: the ambiguity is maintained to the last. The film is scrupulously fair to those who like their boogeymen to be real, and those who prefer the idea that this could all be in the mind of a woman and a girl in desperate circumstances. Because, really, who could blame them?

Under the Shadow is available on Netflix UK, as part of an £8.99 monthly subscription.

Where can I buy or rent Under the Shadow online in the UK? 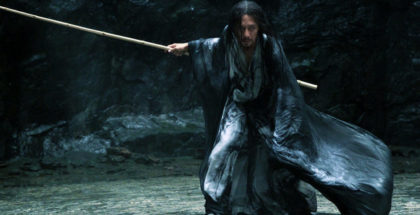