Amazon Prime Video film review: Splice | VODzilla.co | Where to watch online in UK | How to stream

Splice gives its horrible theme a twisted heart. As freaky as it is fascinating.

If you haven’t been there, get ready to see some weird stuff.

Weird is the best word for Vincenzo Natali’s sci-fi creep-out. It’s been a while since we had a good old screw-mother-nature-we’re-scientists movie, and Natali’s happy to provide it. Clive (Brody) and Elsa (Polley) are genetic researchers, funded to splice genes to find cures for diseases. She’s driven, focussed and slightly off-balance, thanks to a dodgy family history. He’s idealistic, clever and in love. So when she decides to push the boundaries of their experiments just one step too far, he goes along with it.

Then, things get out of hand. In true B-Movie tradition, we soon have ourselves a classic Frankenstein’s monster to deal with: Dren (Chaneac), a mutated blend of bird, human, something with a spiky tail and something else with no hair. She communicates through clicks and purrs, never saying a word but captivating her creators from the start. Soon, Elsa’s got a motherly thing going on, and Clive’s the cute step-dad who regrets bringing her into the world in the first place.

As their funding comes under threat, emotions escalate and soon things descend into one heck of a mess – think Elektra complex with wings. But where things get derivative or laughable, the cast’s committed performances make it work. Brody and Polley are familiar characters, believably stupid, completely human, and they easily pull off the contrived scenarios and cheesy dialogue: “I didn’t know you had a barn!” is perhaps the worst line in movie history, but it doesn’t matter. Maybe he really didn’t know she had a barn.

Even more engaging is Dren, the Scrabble-playing lab rat with an eerie face and some serious hormone issues. A seamless combination of puppet-work, CGI, and mute acting, Natali’s monster is both disarming and horrific in one graceful swoop: not since Cronenberg’s The Fly has science fiction been this freaky and interesting. Make no mistake: this is a horror movie through and through. It wants to disturb and unsettle.

With a witty streak of dark humour, it’s no surprise that Guillermo Del Toro is executive producer. It’s terrifying and gross and he probably loves every second of it.

Splice is available to watch online on Amazon Prime Video as part of a Prime membership or a £5.99 monthly subscription.

Where can I buy or rent Splice online in the UK? 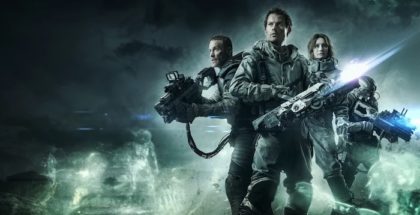