Netflix UK film review: Pitch Perfect 3 | Where to watch online in UK | How to stream legally | When it is available on digital | VODzilla.co 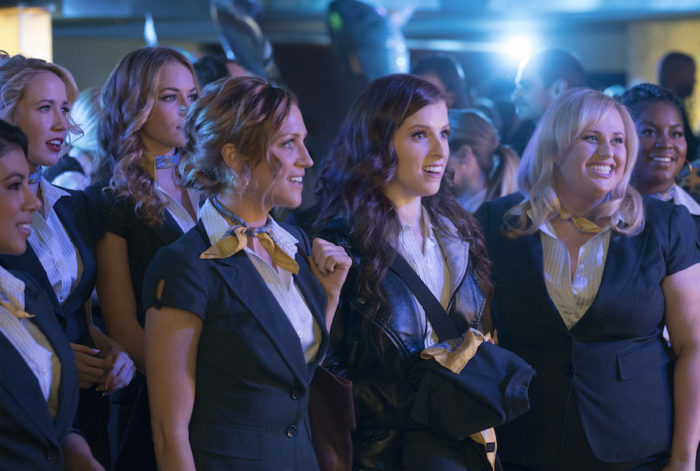 Pitch Perfect struggles to stay in tune as the Bellas return for an uneven sequel.

“Is there a competition? There’s always a competition,” says one of the Barden Bellas in Pitch Perfect 3. Which one doesn’t really matter: by this point, they’re almost interchangeable, as the franchise does what it can to keep things going for just one more film.

The first Pitch Perfect, which landed way back in 2012, was a blast of fresh air, a female ensemble comedy that placed the emphasis on solidarity and friendship over romantic relationships or contrived plots – and, in a masterstroke, expressed that theme through the medium of a capella singing. What started out as novel, though, felt formulaic in Pitch Perfect 2, as the token supporting characters became recycled jokes and catchphrases, while the central plot was primarily a repeat of the original movie. Pitch Perfect 3 tries to make things seem different and fresh once more, beginning with an explosion on a yacht, but that left-field opening feels jarringly out-of-place – and what follows swiftly retreats to the same old rules, but with even less care.

The competition, which the Bellas so desperately need to pad out their film’s running time, takes the form of a USO tour around Europe. The best act on the trip gets a record deal with DJ Khaled, so, naturally, the former university singers jump at the chance to reunite and relive their glory days. Their place on the tour comes courtesy of Aubrey (Anna Camp), whose father works in the military, thereby giving her a chance to reconnect with her estranged dad. No sooner have they taken their place on the tour, though, and we learn that Fat Amy (Rebel Wilson) also has her own estranged father in the area – a dodgy drug dealer-type, played by John Lithgow. One father-daughter reconciliation cliche is a pardonable subplot, but two? That’s just disappointing, as the script seems unable to choose whom should be given an attempted emotional back-story.

It’s an indicator of how much the focus of the franchise has slipped; Pitch Perfect favoured group dynamics over individual exposition, but this third entry can’t decide whether to split its team up or celebrate them being together. Brittany Snow’s Chloe gets a will-they-won’t-they fling with a guy, and so does Lilly (Hana Mae Lee), while Anna Kendrick’s Beca is caught between a possible love interest, a career dilemma and the challenge of still coming up with vocal covers of popular hits. When we see that the Bellas can’t quite compete with their opponents, who are bands with actual musical instruments, it seems less a wry twist on convention and more a reflection of the series’ dwindling convictions.

The music, thankfully, does remain toe-tappingly smart, with harmonies and arrangements all on top form. While that redeemed Pitch Perfect 2’s weaker script, though, Pitch Perfect 3 struggles to pull off the same trick twice. Ruby Rose’s sneering villain can’t quite make up for the fact that her band is called “Evermoist”, or that they ultimately have little to do with the overall story. Hailee Steinfeld’s relative newcomer has been relegated from a singer-songwriter to simply the butt of a running joke. Even the presence of John Michael Higgins and Elizabeth Banks as the obsessive commentators on the Bellas’ a capella progress feels awkwardly shoehorned in. As for Wilson’s Fat Amy, who was laugh-out-loud funny in the original entry, her big jokes now full on even bigger stretches of silence.

It’s a shame, because there are still hints of the same magic in between the underwhelming notes; one sequence sees Beca improvise some samples on a sequencer, as a party behind her descends into chaos, and the resulting sounds are spine-tinglingly good. Kendrick’s charisma, and musical talent, though, can only carry a franchise so far – the fact that the party is hosted by DJ Khaled, who is currently making news headlines for his outdated views of intercourse, is perhaps the most interesting thing about the whole movie. You’re gonna miss me when I’m gone, Pitch Perfect once sang with wit and and a vibrant energy. Judging by this outing, though, that might no longer be true.

Pitch Perfect 3 is available on Netflix UK, as part of an £9.99 monthly subscription.

Where can I buy or rent Pitch Perfect 3 online in the UK?