VOD film review: No Country for Old Men | VODzilla.co | Where to watch online in UK

Brooding, unforgiving and full of portent, No Country for Old Men is a tense noir Western that grips throughout.

An aged man is but a paltry thing, a tattered coat upon a stick…

Sheriff Ed Tom Bell (Jones) is near retirement, disillusioned by a now hostile world; a place where a simple hunter, Llewellyn Moss (Brolin), can wander into what was a drug deal and take $2 million from the clutches of a corpse. His theft soon catches the eye of dispassionate killer Anton Chigurh (Bardem), who is determined to retrieve the stolen money.

Slowly advancing, pneumatic cattle gun in hand, Anton’s presence is made even more terrifying by his prim, pudding bowl haircut. Blowing off locks and heads in equal measure, Bardem’s blood is like ice; a terrifying reaper in a darkly grim thriller. The threatening mood is boosted by the intensity of Brolin’s lead and the brutal violence he unwittingly causes. Desperate to survive, his humanity conflicts with his mechanical pursuer. Before he starts running, he turns to his wife: “If I don’t come back, tell my momma I love her.” The reply comes back: “Your momma’s dead.” Brolin answers, downbeat: “Well, then I’ll tell her myself.”

That vein of dark comedy runs through the bleak, death-strewn desert, a glib humour that has always been a forte of the Coen brothers. Many have emulated their unique brand of film-making, but this take on Cormac McCarthy’s novel demonstrates once again their incomparable talent.

Retaining the dialogue almost word-for-word, they deserve credit not just for the translation itself but for their selection of source material. Rarely has a book felt so well-suited to an auteur’s style – Anton’s interrogation of a gas station owner, perforated by silence, borders frequently on hysterical absurdity, cranking up the tension until his sadistic, playful coin toss.

When the abrupt, yet prescient, ending arrives, the film’s gritty pessimism becomes more evident. Often eschewing music for raw audio and stark visuals, the almost apocalyptic atmosphere is solely conjured up by fateful footfalls or the subtle whistling of the wind. Showcased by an outdated sheriff, the philosophical tone perfectly maps onto the contours of the indifferent Texas plains, unsympathetic to the humans that cross them.

Existential musing is not unfamiliar Coen territory, but after a brief period of lightweight affairs, No Country saw the duo find a new maturity without becoming smug or self-important. That honesty gives their terse, noirish thriller an impact that will shadow you for weeks.

Brooding, unforgiving and full of portent, No Country for Old Men depicts America’s timeless truth without pity. An absolute triumph.

Where can I buy or rent No Country for Old Men online in the UK? 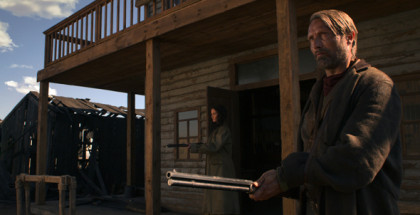