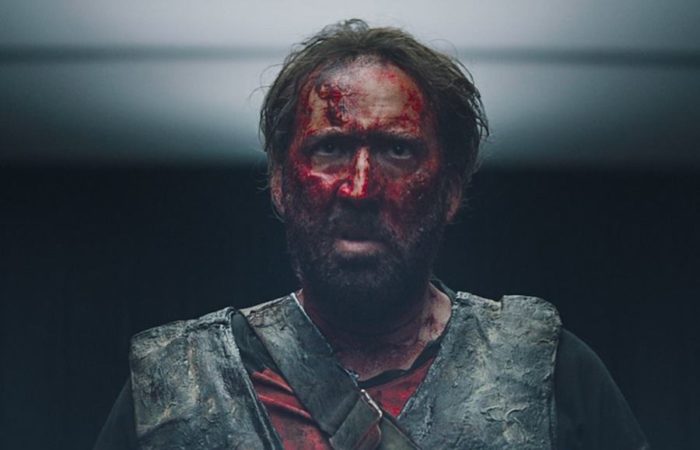 If you get on its phantasmagorical wavelength, Mandy has such sights (and sounds) to show you.

If his 2010 debut feature Beyond the Black Rainbow established Panos Cosmatos as a director whose filmmaking style is hard to define, follow-up Mandy pretty much cements it.

Also set in 1983, the loose story sees a loving couple, Red (Nicolas Cage) and Mandy (Andrea Riseborough), have their world turned upside down, after the latter attracts the attention of an unhinged religious sect leader. Jeremiah Sand (Linus Roache) catches one brief glimpse of the beautiful woman on the side of the road and settles in his mind that she will belong to him. He enlists both his followers and a mysterious group of bikers seemingly summoned from hell to capture Mandy for his own sordid desires. When Sand’s plan for her changes after she defies his advances, Red must venture on one of the most bugnuts journeys of revenge ever depicted on screen. There will be chainsaws. And pyramids. And tigers. And LSD. And figures who seem like rejected cenobites from the Hellraiser franchise. Or maybe they’re just band members from Slipknot – that’s a tricky difference to determine sometimes.

Although it shares some lineage with a couple of genre movie cornerstones (Mad Max and the works of Clive Barker would seem to be key influences), as well as bringing in aesthetic DNA from metal and prog music (not just in the opening use of King Crimson and the late composer Jóhann Jóhannsson’s unnerving soundscapes), Mandy is an aural and visual experience that’s singular and quite unlike anything else contemporary.

And that goes for its pace, too. For all the chatter you may hear about the movie as a pinnacle display of ‘Nicolas Cage Rage’, this is a film that requires patience before it gets to the fireworks factory. And perhaps some open-mindedness from even the most devoted Cage fanatics, for while Mandy undeniably contains some of the actor’s best go-for-broke physical acting in recent years, complemented by the film’s maximalism across the board, this isn’t an example of the performer relishing the opportunity to deliver dialogue in especially memorable ways. Putting aside the screams via the second half’s primal rage, this might be one of the most tender and quiet performances Cage has ever given. Not muted, by any means, but quiet.

Perhaps as a necessity given the face-off with Cage, the film’s most outlandish performance actually comes via Linus Roache as the megalomaniacal Sand. Pulling off something of a career-reinventing part, the usually sensitive and restrained British thespian gets to go full Dennis Hopper, and the character is a fascinating exploration of toxic masculinity in his words and interactions with both followers and Mandy. And speaking of Mandy, the ever-chameleonic Andrea Riseborough is the film’s beating heart, even when the narrative, by design, has to leave her behind.

All three performers are key to Cosmatos’ hypnotic phantasmagorical oddity having the weight that it does. Amid all the madness, brutality and mythological portentousness (in a good way) is a palpable sense of erupting emotion. There’s an aching sense of tragedy that drives the whole piece. Watch it big, watch it loud. Let it bleed all over you.

Mandy is available on Sky Cinema. Don’t have Sky? You can also stream it on NOW TV, as part of a £11.99 Sky Cinema Month Pass subscription.

Where can I buy or rent Mandy online in the UK?