Netflix UK film review: Lo and Behold: Reveries of the Connected World | VODzilla.co | Where to watch online in UK | How to stream

Bizarre, surprising, hilarious, full of insight and vaguely disturbing, Werner Herzog and the Internet are a match made in cyber-heaven

The Internet is a mind-boggling thing to behold. Bizarre, endlessly surprising, often hilarious, full of intellectual insight and vaguely disturbing, who better than Werner Herzog to plumb its hidden depths?

Werner Herzog vs. the Internet. That sentence alone tells you all you need to know about Lo and Behold: Reveries of the Connected World – and sure enough, his expansive documentary does exactly what you’d expect. Breaking down his analysis of our relationship with digital technology into bite-sized chapters, it’s a match made in cyber-heaven. Herzog is a director who has an affinity with outsiders, or with those pushing out on the edge of civilisation. The Internet is full of both. There are those who addicted to games, those who are looking to new life on other planets, those who are building self-driving cars. Cat videos are just the start of humanity’s weird and wonderful potential.

We begin with the birth of the web at Stanford, which is rescued from rote exposition by the sheer uniqueness of Herzog’s voiceover – “This is the campus of the University of California in Los Angeles,” he intones. That level of narration could become intrusive in another filmmaker’s hands, but Herzog’s idiosyncratic observations only add a human element to proceedings. As he moves from factual explanations to more diverse topics, his knack for drawing out human nature turns this film from a clinical study into a colourful tableau of disparate people. We see Elon Musk talking about life on Mars, a hacker deciphering the world of underground computing, a bunch of engineers making footballs hoping to win the World Cup by 2050.

Issues such as surveillance are generally skirted around; this is smaller than Snowden and yet somehow bigger, a study less of politics and more of the positive and negative impact of the digital revolution. We meet a family whose daughter was killed in a car accident, only for photos of the incident to go viral – haunting snapshot of what people are capable of – and then we head to a gamer trying to rehabilitate after their addiction took over their life. (You can hear Werner Herzog restraining from asking more about “malevolent druid dwarves” and other online characters.)

Herzog combines these into something of a reverie on the world wide web, a reverie tinged with his bleak outlook and commentary. “We’ve mostly just proved that we’re good at making our planet less habitable, rather than making others more habitable,” he quips of colonising other planets. The result is rambling (despite its structured chapters) and not as accessible as your typical TV documentary, but that also works in its favour: nobody else could make a film about the Internet quite like this. Almost science fiction rather than a documentary, he winds up in Blade Runner-esque territory, as he starts to question whether the Internet will one day start to dream of itself. The result might look something like this.

Lo and Behold: Reveries of the Connected World is available on Netflix UK, as part of an £8.99 monthly subscription.

Where can I buy or rent Lo and Behold: Reveries of the Connected World online in the UK? 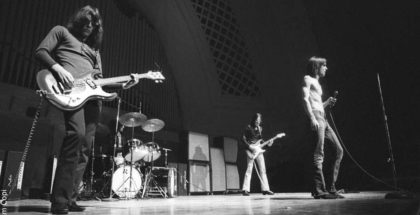