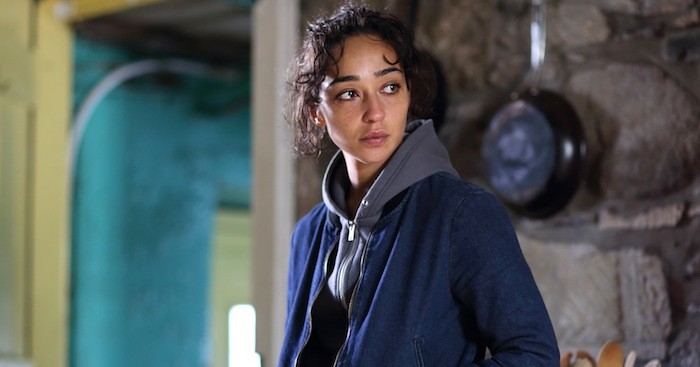 A stark, yet nuanced drama with a host of stellar performances.

Four years ago, British director Scott Graham quietly stunned audiences with Shell, a tale of isolation and coming of age in the Scottish Highlands. His follow-up, Iona, borrows its name from the Hebridean Island, and it’s clear that the setting spells more of the same – but that’s no bad thing.

Ruth Negga, who will be recognised by Marvel fans from Agents of S.H.I.E.L.D. and can soon be seen in US TV’s Preacher, plays the eponymous girl, who returns to the place where she was born. With her is her teenage son, Bull (Gallagher). It soon becomes apparent that the pair are running away from something rather than running back to something – the exact nature of which is revealed over 90 ominous minutes.

Graham, though, is in no rush to bring answers to the table: he plays upon both the couple’s guilt and the looming air of uncertainty, both of which tap into his wider exploration of community and faith. The people Iona returns to are a deeply religious bunch and that belief holds a bearing on all of them, not least in the sins that linger in their past.

Iona is taken in by Daniel (Douglas Henshall) and, while staying with him, reconnects with her sort-of sister, Elizabeth (Duncan), and Elizabeth’s partner, Matthew (Brooke). But even their relationships are prickled with doubt – is Daniel her actual father? And are Matthew and Iona already acquainted in the Biblical sense? And what makes Bull wake up at night, kicking and screaming? The intrigue is magnified by the introduction of Sarah (Groundsell), Elizabeth and Matthew’s daughter, who is unable to use her legs – except for one fleeting, possibly imagined moment in a barn, which itself is tainted with a transgression.

Graham unpicks this thorny society with a delicate nuance, helped by an on-form cast. Groundsell is magnificently naive as the young cripple, while Gallagher’s Bull brings a tough, hard-edged presence that contrasts with that of his mum. Ruth Negga is remarkable in the lead, managing to be as steely as her son, but also constantly vulnerable – he may cry out in exasperation, but her grief and concerns are written all over her silent face. It’s only when she dances in the village hall at a Ceilidh that we see the briefest glimpse of a smile.

Graham, though, is a master of context as much as character; he has a knack for understanding how geography can shape people. In his hands, the island becomes a place of prison as well as refuge – everyone says “Welcome home” to Iona again and again, words that stick out in a script with such little dialogue, but she’s not home and she doesn’t appear to feel welcome. Director of photography Yoliswa von Dallwitz (who worked with Graham on Shell) again captures the bizarre claustrophobia that can come from a wide open space, bringing our heroine’s journey full circle to her homestead – perhaps Iona, the film suggests, can offer some escape after all.

Iona is available on Sky Cinema. Don’t have Sky? You can also stream it on NOW TV, as part of a £11.99 Sky Cinema Month Pass subscription – with a 7-day free trial.

Where can I buy or rent Iona online in the UK?

Why you should be watching Timeless on Netflix... September 17, 2017 | Matthew Turner