VOD film review: Inherent Vice | Where to watch online in UK | How to stream legally | When it is available on digital | VODzilla.co 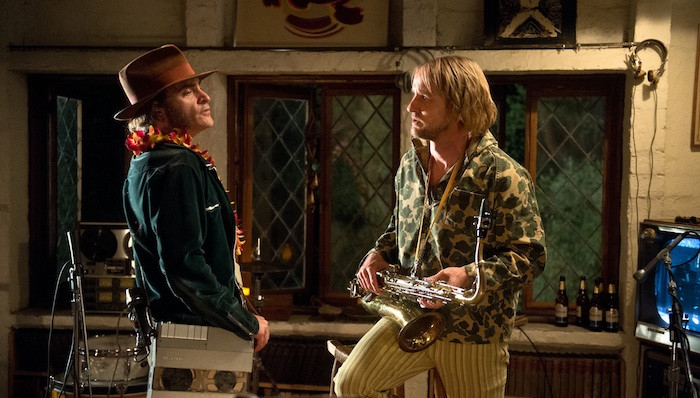 Worth its weight in medical marijuana.

There is an awful lot of hooey peddled around regarding the so-called ‘unfilmable novel’. And because you can never have enough hooey, here’s a little more: the ‘unfilmable novel’ does not and never will exist.

When writers refer to ‘unfilmable novels’, what they really mean is ‘inadequate films sourced from complex and crooked narratives’, which is a different matter entirely. Even then, what they’re usually talking about is something like Cloud Atlas, Bonfire of the Vanities, or some other totally fascinating but catastrophic folly made by an overly ambitious director possessed of more money than sense.

Paul Thomas Anderson knows the score. He’s the greatest living film-maker in the English-speaking world, and frankly, he can do whatever the hell he likes. He wields this privilege like a hatchet. When Anderson brought Upton Sinclair’s novel Oil! to the screen with his 2007 masterpiece There Will Be Blood, he ripped the original text to pieces and instead delivered a curiously bleak and operatic take on the sparse source material. He took the elements of the Sinclair that interested him cinematically and built an empire around them to dazzling effect.

With his latest film, Inherent Vice, the opposite is true: the craziness of the book remains satisfyingly intact. It’s almost ridiculously faithful to Thomas Pynchon’s oblique and labyrinthine stoner noir, the archetypal ‘unfilmable novel’. You can almost smell Anderson getting drunk on Pynchon’s Cheech ‘n’ Chong-meets-Raymond Chandler vibe.

The primary case against an adaptation of Inherent Vice appears to be the novel’s sheer density. It’s the kind of book in which a million things appear to happen, though you’re never entirely sure why, and to what end. Conventional Hollywood thrillers would view incomprehension with a certain degree of suspicion, but thankfully, Anderson’s take embraces the bewilderment. It never dumbs down and it retains the story’s intricacies, even when those intricacies come across as obfuscation.

The film, therefore, doesn’t lack for story; it has plot in abundance. However, like the hucksters and low-lives caught in the vortex of its swirling, hypnotic narrative, it appears to exist everywhere all at once. The protagonist, the detective Larry ‘Doc’ Sportello, is our guide around the edges of this narcotic haze, often sniffing out details and revelations as they float about, deeply inhaling all the clues until a sense of clarity is achieved.

There’s something in there about the disappearance of a hippie chick, called Shasta; the involvement of a real estate mogul, called Mickey Wolfmann; an international drug smuggling operation, called The Golden Fang; and a sax player, called Coy Harlingen, who may or may not be working as an FBI informant. Break down the individual elements, and it all sounds a little bit Naked Gun, if we’re being honest.

How it all ties together, who the hell knows? The overall effect of these shenanigans is deeply impressionistic, at least on a first viewing, and perhaps that’s the point. The details aren’t important; it’s the experience that matters. Even time is a fluid concept: when the film opens, the sun shines duskily over Venice Beach, but one stoned conversation later, our characters emerge into the humidity and darkness of night, and straight into the throes of another mysterious entanglement.

Anderson is effective when it comes to this kind of pathetic fallacy. Like The Master, the first thing the audience sees is the sea. While in Anderson’s previous movie, the ocean was depicted as a violent, churning force, here it is calm, languid and inviting. This sums up the difference between the two perfectly: one is pre-occupied with torment, forever raging against the machine; the other conveys a sense of melancholy and longing, in a world that only ever exists as a lyric in a Neil Young song.

Inherent Vice is also very funny, primarily due to the casting of Joaquin Phoenix as the aforementioned Sportello. His performance here is physical, hilarious, deranged and moving all at once. He has that part-Zach Galifianakis, part-Elliot Gould thing going on for most of the runtime, and it suits him. Whether he’s screaming in terror at the Polaroid image of a woman breast-feeding her child, or reacting in micro-expressions at the sight of hard-ass cop Josh Brolin sucking on a popsicle like it’s an enormous penis, Phoenix is never less than delightful. Like the whole film, the moment when he gets whacked on the head by an unseen heavy with a baseball bat is worth its weight in medical marijuana. Professional comedians would kill to pratfall to that standard.