VOD views jump 23pc as digital drives Channel 4 growth | VODzilla.co | Where to watch online in UK | How to stream

Views on Channel 4 programmes on-demand jumped 23 per cent last year, as the broadcaster’s digital strategy continues to drive its growth.

Channel 4’s 2014 Annual Report, published today, reveals a £30 million increase in revenue for the broadcaster, which totalled £938 million last year. The channel’s spend of £430 million in original content was maintained over the three years to 2014, establishing a new spine of returning series, such as Gogglebox, Educating… ,The Island, The Jump and The Undateables. This creative success saw the broadcaster take home awards including Channel of the Year, three Oscars, and more BAFTA and Royal Television Society programme awards than any other UK channel.

Channel 4 says it has met its planned three-year investment and break even business targets, reporting an overall financial surplus of £3m, with cash reserves remaining above £220 million for the fifth year in a row. That is partly thanks to advertising and sponsorship revenues, which climbed £23 million in 2014 to £869 million.

Digital growth, though, is also at the heart of Channel 4’s ongoing strategy.

Channel 4 has continued to develop its digital presence in the past year. At the start of 2015, 4oD was relaunched as part of Channel’s new All 4 service, which integrates TV viewing, upcoming programmes and archive videos into one platform. That rebrand built on a successful 2014, which saw 4oD launch new original content in addition to its catch-up content, such as the new Shorts channel.

Visits to Channel 4’s websites overall also increased 18 per cent year-on-year to a total of 634 million. Channel 4’s apps accounted for the most significant growth, with the number of visits increasing by 75 per cent, as users become increasingly used to accessing digital content through dedicated apps, such as 4oD (now All 4) and Channel 4 Racing.

Channel 4 News saw also significant uplift in video consumption, with total video views up more than 200 per cent on last year’s total. (Monthly unique visitors to the Channel 4 News website were up 73 per cent year-on-year.)

Focus on data pays off

Channel 4, as we have reported before, is keenly aware of the importance of data. That focus has seen 11.3 million users sign up to a Channel 4 account, giving 4oD and the broadcaster’s websites a userbase that includes half of all 16-34 year olds in the UK.

Of those 11.3 million users, 4.5 million are active at least once every three months – and Channel 4 is already beginning to use their data to fuel its advertising.

In 2014, Channel 4 began to integrate specific viewing behaviour data into its outbound communications – for example, emails – making them more relevant to the viewer. Programmatic trading of Channel 4’s VOD inventory was announced earlier this year too, making them the first broadcaster in the UK to sell targeted online advertising to its users. 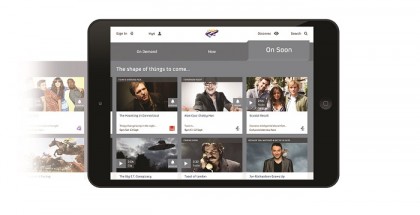