VOD film review: For Those in Peril | VODzilla.co | Where to watch online in UK

VOD film review: For Those in Peril

George MacKay is heartbreakingly good in this powerful study of the sorrow of loss.

Most Holy Spirit! Who didst brood
Upon the chaos dark and rude,
And bid its angry tumult cease,
And give, for wild confusion, peace;
Oh, hear us when we cry to Thee,
For those in peril on the sea!

Paul Wright’s powerful drama begins with the singing of the titular hymn in a tiny Scottish village. Wright’s camera finds Aaron (MacKay) in the congregation, a face wracked by grief among a sea of mourners. It soon transpires that Aaron went out on a fishing voyage with four other men, including his older brother. He was the only one to make it back alive. Aaron is struggling to find peace in the wild confusion of his loss – and so is everyone else.

He lingers in the town like a ghost, not all there – and the villagers like it that way. People hiss at him in the street, blaming him for not dying as well. Others, like his older brother’s partner, find a queasy solace in his existence; one scene featuring an excellent Nichola Burley is a harrowing balance of pain and romance, a pairing that drives her father (Michael Smiley) to violence.

But the film’s emotional impact comes from capturing Aaron’s own internal guilt. Underwater shots swirl into a stunning portrait of personal loss – the kind of poetic isolation that reminds you of the potency of A Single Man. Combining old 16mm video with other footage, the first-time director isn’t afraid to show his creative ambition. While Aaron floats adrift in an ocean of visual flourishes, though, Wright anchors the abstract in grim reality.

Part of that comes from the bleak landscape, but it also stems from the cast. George MacKay is heartbreaking as the tortured Aaron, following up his turn in Sunshine on Leith to confirm his status as one of Britain’s most impressive young stars – it’s safe to say that this is a very different role. The only singing that does feature here comes from Kate Dickie as his mum, who delivers a tragic rendition of The First Time Ever I Saw Your Face that could have been mawkish but is brilliantly underplayed.

As Aaron sinks further into the fairytales his mother feeds him, he becomes desperate to sail away and search for his brother and slay the monster that took him. That hysterical denial climaxes in a monumental shot that lets fantasy capsize real life – a moment that announces Paul Wright as a major new filmmaking talent and beautifully captures the sorrow of loss.

For Those in Peril broods upon the chaos of death, dark and rude, before finally bidding its angry tumult cease. The peace that follows? Wild confusion.

For Those in Peril is available on All 4 until 4th September 2020.

Where can I buy or rent For Those in Peril online in the UK? 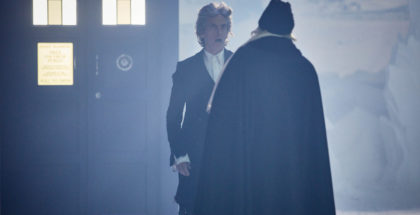