This intimate two-hander is a fantastic showcase for two actors and a director at the top of their game.

Stanley Tucci is one of the most versatile performers in the business, capable of disappearing like a chameleon into any character or background. He pulls off exactly the same trick behind the camera with his fifth directorial effort, Final Portrait, which takes us inside the studio of Alberto Giacometti.

If the idea of a painterly biopic is raising alarm bells, there are none to be heard here, in what emerges as a hushed, almost silent glimpse of the famous Swiss at work. Rather than focus on his life story or a famous masterpiece, Tucci instead hones in on a fairly unimportant painting, as we see American writer James Lord travel to Alberto’s Montparnasse studio to become his latest model. It will only take a few days, he’s assured. Then, a few days more.

A week later, and Lord has had to cancel his flights back to the USA – a cycle of rescheduling and delays that gradually becomes the new norm. Soon, the very real fear looms that he may never be able to leave, like someone trapped in Luis Bunuel’s The Avenging Angel, or a character in a Beckett play. The limbo that emerges inevitably, yet consciously, saps the film of any real narrative thrust, which leaves Final Portrait failing to grip as much as you’d like, but it opens up a space for two actors to do some of their finest work.

Geoffrey Rush has rarely been better than here, as he sinks his teeth into the role of the grouchy perfectionist, a man who is compelled to create but irked by his inability to be as good as he wants. He’s an ageing artist, one who increasingly expresses contempt for others and doubt of himself, convinced he’s getting worse with every year, despite getting more successful. Armie Hammer is a perfect foil, using his sculpted features to bring a stillness and restraint that allows Rush to go all in as the comic grump.

They’re supported by Tony Shalhoub as Giacometti’s assistant, who knows how to manipulate, cajole and tolerate the troubled creative, Sylvie Testud as his long-suffering wife, and Clemence Poesy as his lover and muse. Brief excursions from the studio, and their intrusions from the outside, give the ensemble a chance to bring some substance to the backdrop, but the film is, at heart, a two-hander. The push and pull between artist and subject is often fascinating to see, as Giacometti refuses to complete the work and Lord resists any urge to be impolite and complain. They enjoy being acquaintances (Lord would later write a biography of Giacometti, stemming from this encounter), but also suffer from it – they seem to keep company at each other, rather than with each other.

“A real friend would tell me to give up,” says the painter. “Who says I’m a real friend?” comes the sharp, but playful, reply.

A gentle chamber piece rather than a drama of loud conflicts, the atmosphere created by their interactions is echoed by the superb production design, which brings Giacometti’s studio to life with a cluttered, grubby realism, from the dirty paintbrushes to the wads of money supposedly stashed around the place, because Giacometti wasn’t a fan of banks. Throughout it all, you can just sense Tucci’s own brush strokes, as he crafts an intimate study of creative chaos and motivation that’s coloured with personal truth. It’s a slight piece, sometimes too slight, but Final Portrait is an impressive showcase of a versatile artist at work – here’s hoping this isn’t Tucci’s last time behind the camera. 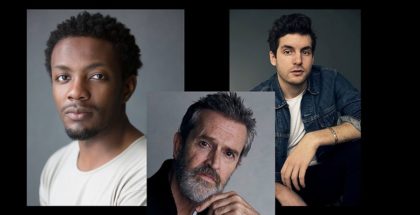