A fantastic character study driven by a tremendous performance by Emily Beecham,

Her name is Daphne and she’s a redhead. There, comparisons with Scooby-Doo end, except that this Daphne is less the investigator of mysteries than the source of the enigma herself. Driven by a tremendous performance by Emily Beecham, Peter Mackie Burns’ film spends 90 minutes observing this fascinating, flawed character without fully figuring her out. One of the opening shots shows Daphne on an escalator, broken into fragments by mirrors. The rest of the film tries to put her back together, but, even at the end, much remains intriguingly, refreshingly open.

It’s rare to see a film whose protagonist is so vividly drawn, but this has an almost claustrophobic concentration on Daphne. We see her at work (where she’s a cook in a gastropub) and at play (in a succession of bars), at home (owns a pet snake, reads Slavoj Žižek) and in various men’s homes (her dating gambit is to invite herself around for casual sex). She’s fun, witty and fiercely independent – and yet visibly troubled, bristling whenever her mother (Geraldine James) turns up, and turning nasty when she drinks too much.

Daphne is a woman adrift – at various points, Burns places his camera high to observe her walking the streets of London, alone and going through the motions. The arc of the film concerns Daphne’s attempts to anchor herself back in her environment – no mean feat, after she witnesses a violent assault during a robbery. That event sends her scurrying further into alcoholism and promiscuity, but it isn’t exactly post-traumatic stress, more that Daphne has been waiting for the excuse to let go, and here it is.

Normally, this type of narrative has an in-built reactionary core that sees the heroine return to some kind of societal norm. Fortunately, Burns, Beecham and screenwriter Nico Mensinga are too smart for that. The more Daphne’s life unravels, the more foul-mouthed she gets, and funnier the film becomes. Scenes that in other films would foreshadow some kind of redemption are subverted to great effect. There’s a hilarious moment where a mother and baby sit next to Daphne, only for the expected Epiphany to end in awkward silence. And there’s a character (Nathaniel Martello-White’s David, a charismatic bouncer who Daphne meets-not-so-cute-with) who is clearly fashioned as a boyfriend/saviour, only for Daphne to assert her own mind on the matter.

The result is cynical but – as Daphne herself notes – it’s “healthy cynicism”, rather than “neurotic cynicism”. That’s a mark of Beecham’s outstanding work, never courting the viewer’s bond but naturally charismatic, but also Burns’ commitment to capturing the rhythms of life in a big city where such gallows humour is needed to get through the daily grind. This is the kind of London hardly ever seen in a movie: banal and untourist-y, yet rich with interesting people and narrative possibilities. Beecham recently told Total Film that Michael Winterbottom’s classic of capital life, Wonderland, was a big formative influence on her acting career. Here, she’s made a London movie to match it.

Where can I buy or rent Daphne online in the UK? 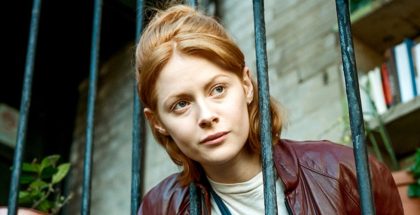