VOD film review: Killing Ground | Where to watch online in UK | How to stream legally | When it is available on digital | VODzilla.co 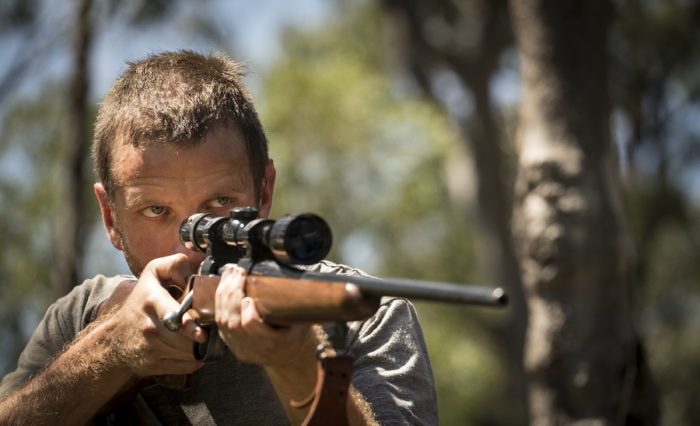 This violent, creepy flick is a deftly diverting horror from Down Under.

Australia has a rich history of a certain type of horror film. The vast, mostly unpopulated outback – a place on earth where no one can hear you scream – is fertile ground for dread. Wide open spaces, an uncaring landscape, an impassive sky from which a blazing sun can be equally as lethal as the wildlife or the roaming, random psychopath. From the films of the ‘70s (Picnic at Hanging Rock, The Long Weekend) through to the more recent Wolf Creek, nothing good comes from venturing off the beaten track Down Under. Damien Powers’ first feature, Killing Ground, is the latest deeply creepy addition to the canon.

Much of the success of this type of horror has been put down to the white settlers’ unease in a landscape in which they, unlike the native Aborigines, are ill-equipped to survive. In The Killing Ground, a nice white couple and a nice white family travel, separately, to a camp near Gungilee Falls. Gungilee, we are told in passing, was the scene of a massacre, where indigenous people were forced over the waterfall at gunpoint by settlers who wanted to run them off their farms. It could be the set-up for a kind of revenge narrative, where the land takes a bloody revenge for the sins of the past. Yet what happens is more prosaic, and pointless, than that – the violence to come is apparently without meaning, which only serves to make it more horrifying.

That horror is heightened by the slow build-up. Three separate timelines are intercut, each one managing to condense characterisation. Happily-in-love couple Sam (Harriet Dyer) and Ian (Ian Meadows) are heading off to a campsite of Ian’s youth with champagne and tinnies, to herald in the new year. When they get there, they discover a large family tent already pitched, yet no sign of any people. Chook (Aaron Glenane) and German (Aaron Pedersen), meanwhile, are at a bar in a nearby township, harassing women and whispering menacingly to each other in the men’s toilets. The third timeline takes place a few days previously, before Sam and Ian arrived at the campsite, when a family – hippie parents Margaret (Maya Strange) and Rob (Julian Garner), their teenage daughter, Em (Tiarnie Coupland), and toddler Ollie – are spending some quality time together in that now-deserted tent.

Cutting out of chronological order, from their quiet family getaway, as they roast marshmallows together, take pictures of each other, and go on hikes, to the ‘present’, in which the only evidence that they were there is their Mary Celeste tent, lends a haunted and menacing atmosphere to Sam and Ian’s holiday. It’s not until about halfway through the film that we find out why, exactly, the tent next to theirs is no longer inhabited, and the pervasive feeling of unsettling dread solidifies into sadistic terror.

The film is effective because of the beauty of the sympathetic characterisation, and the way the actors and the director make us really care for the campers – something sadly lacking in your more common horror fare, where victims of violence are presented as mere ciphers to be picked off, one by one. Such diligent groundwork has been done to humanise these people that having them face a force so thoroughly dehumanising is devastating. The cinematography by Simon Chapman (DoP for the excellent low-budget body-horror The Loved Ones), too, makes the setting idyllic at first, all sunlit-dappled creeks and dense woods, turning into barely passable roads and ever-present, lurking danger in the second half.

At just under an hour and a half, The Killing Ground never outstays its welcome, yet it doesn’t rush things either. While not exactly a fresh take on the genre, it is a deftly diverting one – and for Damien Powers, it’s a pretty triumphant debut.

Killing Ground is available to watch online on Amazon Prime Video as part of a Prime membership or a £5.99 monthly subscription.

Where can I buy or rent Killing Ground online in the UK?