There's little pleasure to be had in this disappointing misfire from Another Earth director Mike Cahill.

“It’s starting to feel like you’re making this up as you go along,” says Greg (Owen Wilson) to Isabel (Salma Hayek) in the middle of Bliss. The latest from Another Earth director Mike Cahill, it’s a mind-bending, reality-warping sci-fi that is full of his trademark ideas and world-building.

Another Earth saw Cahill use the idea of a doppleganger planet to explore notions of guilt, regret and connection on the planet we do have. His follow-up, I Origins, turned eyesight research into a springboard for a meditation on reincarnation. He’s a storyteller with an unabashed sense of earnestness to go with his imagination, able to find the tiny human heart in the middle of the highest concepts. Bliss poses a simple question – what if everything we know isn’t real? – but loses any meaning to the answer in endless exposition.

Isabel is our Morpheus in this Matrix-like scenario, and she promptly appears in a bar opposite Greg’s workplace with some pills and promises to take him away to a better place. What ensues are some bizarre rom-com-style dates that involve apparent telekinetic powers, intercut with some even more bizarre cameos from Bill Nye and Slavoj Žižek. While all of this sounds intriguingly odd, though, it’s wrapped up with exchanges that are just bizarrely bad – the opening scene involves manslaughter, which gives you an idea of how confused the movie’s tone is.

Wilson throws his all into the character of Greg, sinking into misery and confusion with a permanently perplexed facial expression, even when he thinks he’s happy. Hayek turns it up to 11 as the eccentric spirit guide obsessed with “finding bliss”, but finds some pathos in what could be a highly annoying character. Cahill and DoP Markus Förderer (I Origins) create some gorgeous visual moments, playing with light and colour to refract everyday objects through new perspectives.

None of this, however, can redeem a script that treats its themes of reality, self-awareness, self-care and having a home with a simultaneous disregard and heavy-handed seriousness – sequences involving Greg’s daughter Emily (Nesta Cooper) are meant to ground things emotionally but only highlight how far the film has drifted from its central concerns. Cahill’s films have often celebrated curiosity and connection – and the way humans can use the knowledge they acquire to make better decisions about how they relate to the people who matter. Bliss spends so long trying to set up its own take on the world that it forgets what made its director’s previous work so enchanting in the first place.

Bliss (2020) is available to watch online on Amazon Prime Video as part of a Prime membership or a £5.99 monthly subscription.

On My Block returns for fourth and final season 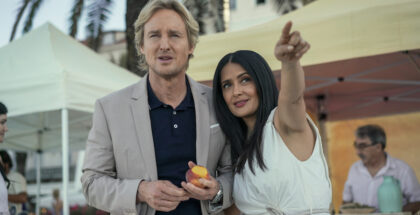