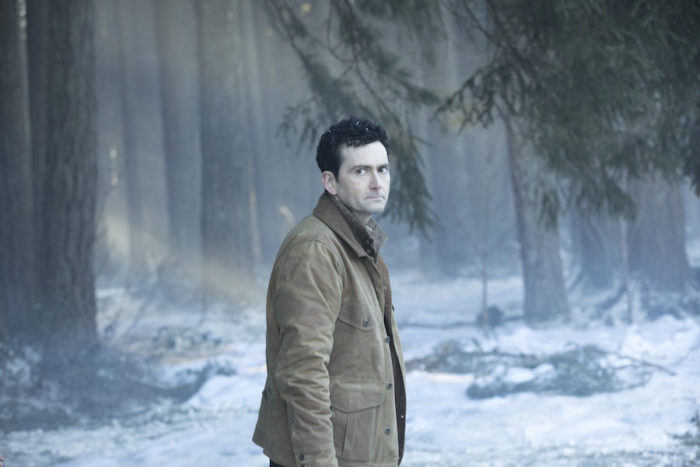 Showing touching loyalty to his Geostorm director, Sheehan plays small-time crook Sean Falco, who runs a valet parking racket with his best friend, Derek Sandoval (Carlito Olivero), whereby they hop in the car they’re supposed to park, use the GPS to get back to the owner’s home, steal a load of stuff that won’t get noticed and then bring the car back before anyone’s the wiser. When trust fund douchebag Cale Erendreich (Tennant) treats him with contempt, Sean is only too happy to rob him blind, but things quickly get out of hand, when he discovers his latest victim has a young woman (Kerry Condon) chained up in his office.

Tennant is clearly enjoying himself as Cale, a full-blown psychopath plagued by a childhood incident involving a horse (glimpsed in flashback). To his credit, he doesn’t just re-do his acclaimed Kilgrave routine from Jessica Jones – instead, he adopts an American accent, makes his eyes look as evil as possible and then constantly dials the performance up and down, depending on his mood. One minute, he’s smoothly taunting Sean over the phone, the next, he’s screaming incoherently at his captive before nicking a bit from Silence of the Lambs and asking her to do a specific bathing routine. It’s the sheer unpredictability of the performance that makes it fun, something that’s heightened by the fact that he occasionally appears to be in multiple places at once.

Sheehan, by contrast, wisely dials it down – he’s even allowed to use his native Irish accent. The result is a strongly engaging performance that’s rendered extra sympathetic by his earnest attempts to do the right thing. Similarly, Condon does her best to bring a little something extra to the captive woman role, although the captor-captive relationship is left frustratingly vague.

Like Tennant’s performance, the ridiculous script is all over the place, as if the film doesn’t have the attention span to be a straightforward captivity thriller. Along the way, it tries to make various social points, from the entitled arrogance of the 1% to the difficulties of getting justice (especially if you’re a criminal) to the fact that letting someone take a topless photo of you is never a good idea, no matter how trustworthy they are, but these are all tossed off in half-hearted fashion, so the film never comes close to actually meaning anything.

That said, Devlin can handle a suspense sequence and the film throws enough bizarre plot developments at the wall to ensure that at least some of them stick (Cale’s casual disregard for his own property has to be seen to be believed). Bad Samaritan is a lot of fun, provided you don’t take it too seriously.

Bad Samaritan is available to watch online on Amazon Prime Video as part of a Prime membership or a £5.99 monthly subscription.

Where can I buy or rent Bad Samaritan online in the UK?