Last year, a dystopian sci-fi Western premiered at Sundance called Young Ones – not to be confused with the Rik Mayall BBC comedy of the same name. This week, the same dystopian sci-fi Western arrives in UK cinemas and on VOD, now called Bad Land: Road to Fury – hopefully to be confused with the Mad Max sequel coming out in a few weeks’ time. It’s a cheap tactic, not because of the intent behind it but because you feel this film deserves better.

Michael Shannon stars as Ernest Holm, a farmer failing to make ends meet in a future where water is hard to find. His farm is fertile, but dry, he explains to anyone who will listen, while running supplies to scrape together some cash. It’s mostly bad news for son Jerome (Smit-McPhee) and daughter Mary (Fanning), who is involved with a bike-riding scoundrel with the brilliant name of Flem Lever (Hoult). Ernest is none too keen on her seeing him. Of course, Flem has his own ideas, both for her and the land.

Writer and director Jake Paltrow tells the tale of this small group’s inevitable collision in three chapters, a structure that gives events a finite, historical feel: the parched air is laced with tragedy. That feeds into the melancholic mood of the piece, which drags its feet deliberately through the dust, a modern society caught in the frontier survival of Westerns past.

Paltrow builds his world brilliantly, his frame opening out onto bleached sandscapes, while aircraft sonic boom through the sky above. When a mule is injured, he’s replaced by a machine called Sim; a robotic basket on legs that stalks slowly across the panorama. It’s such a good tapestry upon which to write a tale that it’s disappointing his story doesn’t quite live up to it.

Shannon is excellent as the desperate dad, twitching like a Clint Eastwood outlaw, while Hoult is enjoyably oily as his villainous rival, but Fanning is left to make the most of an underwritten female part, while the story of betrayal and payback takes so much time that some viewers may well tune out. But even if the plot is as sparse as the location, Paltrow’s cast bring a depth to their shifting, albeit simple, relationships – backed by Nathan Johnson’s emotional score – that keeps you watching. If that slow-burn approach means that Sim emerges as the best (and most important) character in it, it’s only testament to this filmmaker’s low-budget creativity. It may be trying to blend in with Bad Land, but this dystopian sci-fi has an imagination of its own.

Renamed: The Humbling released on UK VOD as The Last Act 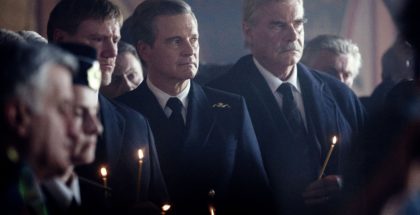